Salvation, it has been determined, is a free gift which comes from God. It cannot be bought, because it is not for sale. When we come to the knowledge of the truth, we are one step on our way to being saved. We cannot have an encounter with salvation and miss out on God's grace upon our lives.

Our Lord Jesus enlightened Pharisee Nicodemus when He told him: "No one can see the unless he is born again." (John 3:3) Except we understand things differently, we will miss the point altogether. Salvation is a process where the flesh gradually and progressively gives in to the Spirit. Jesus added: "Flesh gives birth to flesh, but the Spirit gives birth to spirit." (John 3:6) There are things we cannot understand with our physical mind and eyes. They are too deep, too profound. We can perceive them only with our spiritual eyes. To get to that stage we would need to be transformed, completely changed.

Zacchaeus, a tax collector, the equivalent of a customs officer in our day, had a burning desire to see this Jesus of whom he had heard a lot. When they finally met, Jesus invited Himself to Zacchaeus' house. It was whilst they were having dinner that Zacchaeus made a stunning declaration "Look, look, Lord! Here and now I give half of my possessions to the poor, and if I have cheated anybody out of anything, I will pay back four times the amount." (Luke 19:8) Mark you, Jesus had up to this point not uttered a word. His reaction to his host's transformation is wrapped up in these words. "Today salvation has come to this house.for the Son of Man came to seek and to save what was lost." (Luke 19:9)

Basking in the light of Jesus' presence, Zacchaeus undergoes a radical transformation and became SAVED. He freed himself from his past and became a new being. The people around at the time, who knew Zacchaeus to be a rogue and dishonest individual, were amazed to see Jesus in his company and they muttered. "He has gone to be the guest of a sinner." (Luke 19.7) For Zacchaeus it was a memorable occasion. "The Lord, the Lord, is my strength and my song; He has become my salvation." (Isaiah 12:2)

Salvation is identical with the person and image of Jesus. He said: "Just as Moses lifted up the snake in the desert, so the Son of Man must be lifted up, that everyone who believes in Him may have eternal life." (John 3:14) The Children of Israel had rebelled against God when they became impatient and spoke openly against God and against Moses. "Why have you brought us up out of to die in the desert? There is no water! And we detest this miserable food!" (Numbers 21:5) they had complained.

"Then the Lord sent venomous snakes among them; they bit the people and many Israelites died. The people came to Moses and said, "We sinned when we spoke against the Lord and against you. Pray that the Lord will take the snakes away from us." So Moses prayed for the people. The Lord said to Moses "Make a snake and put it up on a pole; anyone who is bitten can look at it and live." So Moses made a bronze snake and put it on a pole. Then when any one was bitten by a snake and looked at the bronze snake, he lived." (Numbers 21.6-9)

In the same manner, when we look up to Jesus and the sacrifice He had made for humanity on the cross of , we also can receive our salvation. Jesus was lifted up upon the cross and like the bronze serpent of Moses, anyone who recognises him/herself as a sinner and looks up to him for help will be saved.

Salvation is not only free but it is available to all and sundry who yearn to obtain it. Its sole condition is that we profess our faith in our Lord Jesus and believe. It requires us to confess with our mouths that Jesus is Lord and believe that He was raised from the dead. (Romans 10:9)

Salvation is identical with eternal life. He who is saved is saved into eternal life - that quality of life which makes one live a life that is everlasting. You live even though you die physically.

God is inviting us to "Turn to me and be saved." (Isaiah 45:22) For the God we serve is able to save us. (Daniel 3:17) Prophet Joel made a solemn appeal to us as he wrote "And everyone who calls on the name of the Lord will be saved." (Joel 2:32)  Our Lord Jesus Himself declared; "For God did not send his Son into the world to condemn the world, but to save the world through him. (John 3:17)

God is the only one who can save us. He has put at our disposal a Redeemer, a Saviour called Jesus who came down from heaven to save humanity. (Matthew 1:21)

He is the only door. "I am the gate; whoever enters through me will be saved. He will come in and go out, and find pasture." (John 10:9) He is the only Saviour. "Salvation is found in no one else, for there is no other name given to men by which we must be saved." (Acts 4:12)

When Joseph and Mary in keeping with Jewish custom took eight-day old Jesus to the temple to present Him to the high priest, they met with a righteous and devout man named Simeon in the temple. Moved by the Spirit, he took the baby into his arms and prayed: "Sovereign Lord, as you have promised, you now dismiss your servant in peace. For my eyes have seen your salvation, which you have prepared in the sight of all people, a light for revelation to the Gentiles and for glory to your people ." (Luke 2:29-32) Simeon was beholding the salvation of the world as was revealed to him by the Spirit of God. It was an occasion He was waiting for. Now that God's glory had been revealed to him he was ready to depart this world.

Salvation overtook a whole village in like a flood when a Samaritan women dashed home from an encounter she had with Jesus at the well, to share with her people the good news. "Come, see a man who told me everything I ever did." (John 4:29) They also had a testimony to give after their encounter with Jesus. "We no longer believe just because of what you (the woman) said, now we have heard for ourselves and we know that this man really is the Saviour of the world." (John 4:42)
What is your testimony today? 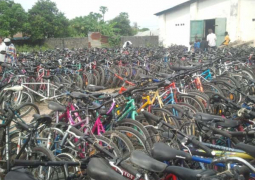