The Gambia Christian Council responsible for the affairs of Christians in the country has changed their executive to enable them carry on with the task. The Christian Council comprises mainly the Methodists, Anglicans and the Catholics. Other Christian denominations are allowed to join in but the above form the core. May be because of their history that dates over decades during colonial struggles. The Council seeks to bring unity and peace and have intentions of going ahead with the good work they started some 42 years ago. The Chairman is changed every two years between the Methodist, Anglican and Catholic heads. Bishop Robert Patrick Ellison CSSp has handed the baton to Rt. Rev. Tilewa Johnson the Anglican Bishop of The Gambia. He has presented his resolve to forge ahead from where Bishop Ellison stopped. Other members like the Secretary General, the Vice Chair were inducted too. Panorama tells how it happened.

The Christian Council gathered Christians of all denominations to see in a service how the baton moved from Bishop Ellison to Bishop Johnson. This rotates every two years and the individual takes responsibility of the Gambian Christians for the two years. The work in the Council is said to have branches ranging from education, spirituality, agriculture and more. They have eight sub committees. These have sub heads to take care of the said committees.

Rev. Fr. Edward Gomez, the Cathedral of Our Lady Banjul Administrator was elected the Secretary General of the Christian Council and Sr. Sarian Gomez was elected the Vice-Chairman to the Council. The induction service was characterised by the coincidence of Fr. Edu Gomez's celebration of his 23rd anniversary as a priest and his birthday celebration the same day.

Norman Grigg, Chairman of the Methodist Mission in the , addressing the group said familiarity breeds contempt, "We can't take notice of good things," he said. He admired the relationship between the different faiths and says, "It is amazing!" He further stated that other denominations were present at the induction service and also the place given to Christians among the 95% Muslims is fantastic. "I hope that the freshness of the Christian Council remains. Bishop Ellison has served his two-year term. He is very well known for his knowledge in the Muslim faith and known for his par played in Church," he said.

He says, "Bishop Johnson is bred and born in The Gambia. He is a member of the All-African Anglican Council, All African Council of Churches, All World Council of Churches, a well-known clergy in the world and he is going to represent us. We should not become so familiar to our fellowship to ignore it. It is the grace of God that helps us to praise Him. This is a transitional service, praying that Bishop Johnson serves us well," he said.

Bishop Ellison CSSp, the outgoing Chairman thanked the gathering and further thanked the new Chairman. In his special word of gratitude Bishop Ellison thanked the outgoing executive for their support. He remembered their Saturday meetings and how they shared with each other. "It deepened our relationship, they say two heads are better than one but I will also say three heads are better than two. It is not easy to meet in the face of many schedules, including church work and family," he said. "I welcome all executive members coming in. The Secretary General carries a lot of job on his head, the treasurer too. "If the water is running out more than running in we are in trouble," he said.

It is my privilege to hand over the baton to the incoming Chairman whom we all know and to thank Sr. Sarian the new vice chairman.

At this stage the baton, represented by the constitution was handed to Bishop Johnson. He thanked Marie Louise Mendy, the administrative Secretary of the Christian Council.

Rev. Fr. Lee P. Batson, Diocesan Ecumenical Officer Diocese of Chelmsford UK, addressing the gathering said as a tourist one stays in the hotel but for him he appreciates that he lives with his people. "Talking to Gambian Christians I ask where did the Christian impetus begin?" he asked. He said it started from when Christians gathered together and allowed them to see how effective it could be to spread Christianity. What motivated those Missionaries?

"The fact that we are all one is an evidence of what happened in long ago. Our coming together is not to show that we are better than the others but to appreciate what God has done for us," Rev. Fr. Batson said.

Bishop Tilewa Johnson talked on the history of the Gambia Christian Council, the work they are engaged in and the different members that form the Christian Council and their affiliate members. He said they have 8 committees for different areas of intervention. Fr. Edu the new Secretary gave a unique vote of thanks with quotes from the Bible to consolidate his thank you to all.

Fr. Edu's celebration overshadowed the event at the end when a party was thrown on his behalf. 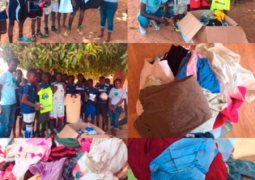