SHE SHE SHE:Mr President: Should we have a National Assembly without differently-able women?

This is the new Gambia they say where every Gambian able or differently-able contributed in one way or the other to effect the change of government.

Now that there is change and a new government in place, the coalition Government headed by President Adama Barrow seems to forget about the differently-able people, especially the women who are mostly prone to attack whilst seeking for survival.

Mr President, the differently-able women vote, clap, sing and dance for you. They probably tour the entire country with you, and yet they don’t have a taste of your government.

There is no political party in The Gambia that can say that among his or her supporters there are no differently-able women that have what it takes to be selected as a flag-bearer or to contest elections in the name of the party.

Since the politics started from the presidential election to the parliamentary elections, there has never been a time where a particular political party selected a differently-able woman to represent his or her party to contest elections.

What is the driving force behind that? Why are they not included in politics? Do they refuse to participate? Do the political parties discriminate them?

In the last 22 years of Jammeh’s rule, the National Assembly has been dominated by able people, when as a country we have differently-able women who are human beings and are citizens of this country, and who have the right to vote and be voted for.

Yes, they are involved during the campaigns and political parties do everything within their power to convince them to vote for them; and yet they neglect them when it comes to giving away positions.

They are discriminated, marginalized, neglected and we as a society reduce them to beggars and watch them drown in poverty.

Where is our honour? What happened to preserving the dignity and equality for all irrespective of being able or differently-able?

Mr President, it is rather unfortunate that in your entire inaugural speech these very important people and citizens of this great nation were not mentioned; and plans were not outlined on how you and your government will champion the issues that they are faced with in their struggle to survive all the negativity they are faced with.

Mr President, allow me to bring to your attention that as human beings, the differently-able women have rights that need to be respected and fulfilled by your government.

But it is rather unfortunate that in all the cabinet appointments you made since you assumed office does not include the differently-able women.

Is it because we don’t have differently-able women and men that can handle those positions? Is it a form of segregation? Do they matter to you at all? Maybe you have an important reason that I have not seen or missed when I’m writing this to you. But Mr. President, the fact remains that they are citizens of this country who fall under your responsibility.

Mr President, as the chief servant of all Gambians, you have the responsibility to look after these people, protect them and include them in your development agenda because, if for nothing, they are human beings and citizens of this great country.

Their natural features maybe missing, but that does not make them redundant. They struggle like the able people and educate themselves to a satisfactory level, so they should be given that opportunity to utilize the knowledge gained.

We do not have the right to discriminate, segregate, neglect and to think that the only thing they should be doing is to sit at a busy street corner with their cups begging.

They are not born to be beggars, neither were some of them even born that way, but life is a crazy ride and nothing is guaranteed. So why should we not include them in national development.

During the nomination, it was rather unfortunate that there was no differently-able woman that was being nominated by a political party, or even selected by people or the community to represent them as an independent candidate.

And so far, all the candidates during their rallies or interviews hardly talk about pushing laws or bills that will favour the differently-able people. Unfortunately, this is The Gambia we are building.

Mr President, since the nominations were done and the elections are near, there is nothing one can do to make sure that differently-able people contest it.

They are the very ones who know what they want and feel the pain of what they are going through. Don’t just stop at there, you can also appoint them as directors, permanent secretaries, governors, mayors, local government authorities and other vital positions so that our decisions can reflect them and what they represent.

Chief Servant, and the Gambian people should know that the woman sitting at the street corner begging should not be there as a differently-able woman, if the society and the Gambians change their attitudes toward them.

The woman on the wheel-chair begging and trying to survive should not be neglected, but cared and catered for, so that she will not be exposed to violence, harassment, torture and even death. They are one of us, and we have to accept them as one of us.

As people and society, we have to learn to be tolerant of the way each and every one of us is created. We have to be there for each other and promote equality for all, so that we can be a perfect example to the young ones and the unborn generations.

Mr President, we hope you and your government will put up measures that will help get the differently-able women off the streets and give them a dignified life. We are not asking the government to give them charity, but to make them be part of those who will be giving instead of receiving. 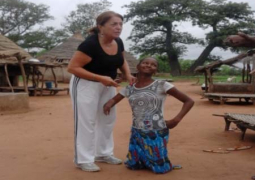