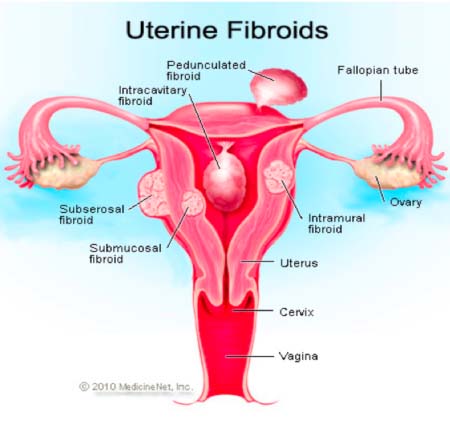 Hello and welcome to another edition of She-She-she your weekly column that deals with issues affecting women and girls within the country and beyond.

Have you heard of a sickness called Uterine Fibroid before? Are you a victim of Uterine Fibroid? If not it is also among sicknesses that befall women. If you want to know more read on:

Most women with uterine fibroids have no symptoms.

However, abnormal uterine bleeding is the most common symptom of a fibroid. If the tumors are near the uterine lining, or interfere with the blood flow to the lining, they can cause heavy periods, painful periods, prolonged periods or spotting between menses.

Women with excessive bleeding due to fibroids may develop iron deficiency anemia. Uterine fibroids that are deteriorating can sometimes cause severe, localized pain.

Fibroids can also cause a number of symptoms depending on their size, location within the uterus, and how close they are to adjacent pelvic organs. Large fibroids can cause:

Uterine fibroids are benign tumors that originate in the uterus (womb).

It is not known exactly why women develop uterine fibroids.

Most women with uterine fibroids have no symptoms. However, fibroids can cause a number of symptoms depending on their size, location within the uterus, and how close they are to adjacent pelvic organs. These are most commonly abnormal bleeding, pain and pressure.

Uterine fibroids are diagnosed by pelvic exam and by ultrasound.

If treatment for uterine fibroids is required, both surgical and medical treatment options are available.

What are uterine fibroids?

Uterine fibroids are often described based upon their location within the uterus. Subserosal fibroids are located beneath the serosa (the lining membrane on the outside of the uterus).

excessively heavy or prolonged menstrual bleeding is a common symptom. Women describe soaking through sanitary protection in less than an hour, passing blood clots and being unable to leave the house during the heaviest day of flow. As a result, some women develop anemia, also known as a low blood count.

Anemia can cause fatigue, headaches and light-headedness.

If heavy bleeding interferes with your everyday activities or if you develop anemia, you should see your doctor to discuss fibroid treatment options.

Women with large fibroids may feel heaviness or pressure in their lower abdomen or pelvis. Often this is described as a vague discomfort rather than a sharp pain. Sometimes, the enlarged uterus makes it difficult to lie face down, bend over or exercise without discomfort.

A less common symptom is acute, severe pain. This occurs when a fibroid goes through a process called degeneration. Usually, the pain is localized to a specific spot and improves on its own within two to four weeks. Using a pain reliever, such as ibuprofen, can decrease the pain significantly. However, chronic pelvic pain can also occur. This type of pain is usually mild but persistent and confined to a specific area.

the most common bladder symptom needs to urinate frequently. A woman may wake up several times during the night to empty her bladder. Occasionally, women are unable to urinate despite a full bladder.

These symptoms are caused by fibroids pressing against the bladder, reducing its capacity for holding urine or blocking the outflow of urine. Treatment for bladder problems can provide great relief.

Rarely, fibroids press against the muscles and nerves of the lower back and cause back pain. A large fibroid on the back surface of the uterus is more likely to cause back pain than a small fibroid within the uterine wall.

Because back pain is so common, it is important to look for other causes of the pain before attributing it to fibroids.

Fibroids also can press against the rectum and cause a sensation of rectal fullness, difficulty having a bowel movement or pain with bowel movements. Sometimes, fibroids can lead to the development of a hemorrhoid.

Discomfort or Pain with Sexual Intercourse -

Fibroids can make sexual intercourse painful or uncomfortable. The pain may occur only in specific positions or during certain times of the menstrual cycle.

Discomfort during intercourse is a significant issue. If your doctor doesn’t ask you about this symptom, make sure you mention it.

GAMCOTRAP on One Billion Rising Revolution 2015