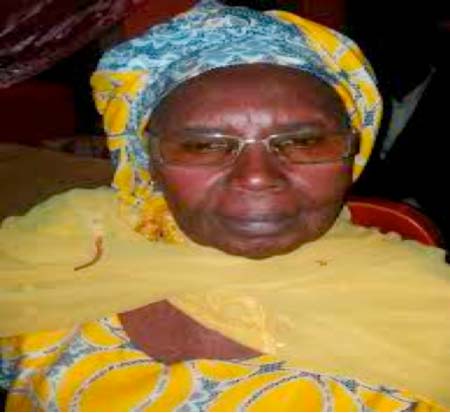 She fought, lived and won the struggle against the incumbent, when her party leader was put behind bars as the country prepared for December 1 presidential polls.

I have heard of this lioness from Banjul, well before I got the chance to meet her at the High Court in Banjul and the Mansakonko High Court in Lower River Region.

Some people have nick names, and sometimes I have to question it because they do not live up to expectations.

But this woman was unbreakable in the face of difficult times. She is indeed is a lioness, and that is why there cannot be any other woman more qualified who deserves to be awarded SHE-SHE-SHE’s Woman of the Year 2016 accolade.

As we are preparing to bid farewell to 2016, a year of victory, history, happiness and great achievements in the lives of every Gambian, SHE-SHE-SHE wishes to thank its esteem and loyal readers for making the column their favourite, and looks forward to many more happy and great moments ahead in 2017.

As part of this farewell, I bring forward to you the SHE-SHE-SHE woman of the Year 2016.

Since I took over this column, various women have been the given award by this column, due to their outstanding role in our society, year after year.

This time, our Woman of the Year 2016 is an ordinary, simple, humble, yet brilliant, smart, intelligent fighter who never gave up, despite threats, torture and incarceration.

She is Aji Yam Secka, the lioness herself. She is the deputy party leader of United Democratic Party (UDP).

I first met her at the High Court in Banjul when Darboe and Co were taken to court on various charges, at a time when UDP like any other political party should be preparing for the December 1 presidential polls.

She is a woman and a deputy party leader, who was also acting party leader when her party leader Darboe was put behind bars for demanding the release of Ebrima Solo Sandeng, dead or alive, along with other Westfield protesters.

As a woman, it is natural that some men may think that during this trying times she would be weakened, but she proved them wrong, and held on to her strength, tightened her belt and lead the entire UDP family to every court sitting, from Banjul High Court to Mansakonko High Court in LRR.

This was the woman that coordinated the affairs of UDP, and made it even stronger in the absence of the party leader.

She is also a diplomat, and that is why she only knew how to deal with rumours surrounding her party, the UDP.

“I wish to register my greetings to the courageous family members of the victims of 14 and 16 April and of 9 May 2016, who are present or could not be with us,” she said in one of her statements during the case.

She is the deputy party leader for all, and this she manifested during the trials involving her party members and supporters.

It is very difficult for one who does not know her, as being the deputy party leader, to spot her out in the midst of other people in court; because she is the type that maintained a low profile, and the type who does not possess the attitude of “maa fi cess” (I’m the one in charge). Aji Yam Secka was thus perfect woman for the role.

She is a veteran politician, and a woman of substance. She is a powerful writer, and that is why whenever she responds to any rumour about her party in a statement format, the message is always well consumed without an iota of doubt.

Indeed, she is a lioness and a fighter. She alone brought together all the families of those UDP supporters behind bars, under one umbrella, and gave them the emotional support that they needed throughout the trial; and never for once let them go astray as she fought her diplomatic and heroic fight in the political arena.

“Whilst we were busy on the court cases, and to see that our people are free from illegal state abduction, the APRC government has also been busy bullying and intimidating our supporters in different parts of the country so that they can abandon the UDP.

“Some people have also used that as an opportunity going around the country telling people that the UDP is dead; that they should abandon the UDP, and many other unfounded stories. This has created confusion across the country among our supporters, we were told. There is no iota of truth in that,” she said.

This is one such powerful quotation from a statement she wrote.

Aji Yam Secka is not just the Woman of 2016, but she is the woman for all generations and all times, because she survived threatening political situations that many will think a woman is not fit for.

This was not just the woman who gave emotional support to the victims or survivors of April, 14, 16 and of 9 May, 2016, but whenever she and her team visited them, they are given both money and foodstuff for their upkeep; thus, keeping their struggle spirits alive.

“You all know that since 1996 Yahya Jammeh has been targeting the UDP to either deregister us or to render us ineffective. This is because we are his biggest problem. He saw the events of April 14 and 16 as an opportunity to clamp down on the UDP,” she said.

How many women will stand up to an incumbent with such powerful words in the 21st century, if not for a woman like Aji Yam Secka who is a daring female politician?

The “Calabash and Broom Revolution” all started at the high court under her leadership, and it worked well. Many a time, we have seen that in most of organizations, the moment the leader is absent for any reason, the organization fails to function; but I’m sure the supporters of UDP will agree with me that the party became even stronger and better with Aji Yam leading and acting on behalf of Darboe.

She designed the political game, mobilized the grassroots UDP supporters, and embarked on house-to-house, one-on-one, regional and nationwide rallies and preached the words and wisdom of Ousainou Darboe, as well as make UDP supporters believe in its leadership and fuelled their determination to vote out the incumbent; and she succeed and became the political game changer.

“We have seen how the judges compromised themselves by ignoring all ethical standards for a free and fair trial, by not even allowing our lawyers to have a private confidential discussion with our people.

“There are many other injustices that we can continue to talk about. The UDP will continue to say that the trials and the subsequent verdicts that put our great leader and his co-accused persons, as well as our other supporters to prison, were just a farce and travesty of justice.”

I can recall and quote every statement released by her, and fill all the pages of my column with it and still there will be more, because she is the fearless female fighter of her time.

She stands firm on her ground, and was not even shaken a bit by any doings of the state and security officials during the trials.

So I begin with the secret behind that bravery, that I admire every time I set my eyes on her.

When I last met her at the high court after the December 1 victory, where Darboe and other political prisoners were released, she said: “We will feed them and take them to the best doctors for treatment.”

I keep thinking and wondering what if she is selected as the Vice President of the new Government, side by side with president-elect Adama Barrow; because if that happens she will survive, live and win every struggle and challenge that comes her way, just like the way she fought, and lived to win the struggle against the incumbent.

My dear Aunty Aji Yam Secka, you are indeed the Woman of the Year 2016 and even more. As a young lady, I keep wondering how you do it; and, if you are reading this, I hope our paths will cross again one-on-one, and you will share with me and my readership the secret behind your bravery.

SHE-SHE-SHE wishes everyone a happy and prosperous New Year in advance, and hopes that in 2017 a lot of interesting stories about women, girls and children will be heard and told in this column.