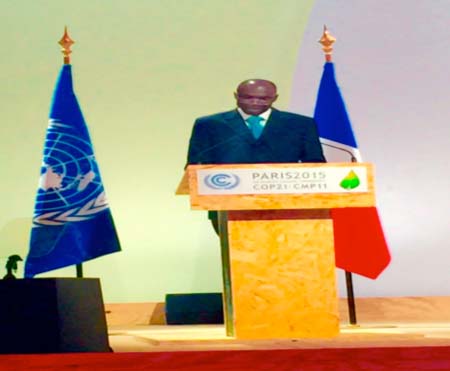 “I and my delegation came to Paris with enthusiasm and very high expectations. We have come to adopt a robust and ambitious agreement.

“This agreement needs to be legally binding and hold average global temperature rise to below 1.50C.  This is what the most vulnerable communities, including my country and elsewhere in the world, need from Paris. Anything less will be considered an awful disappointment.

“It is worth noting that the Durban decision to “launch a process to develop a protocol, another legal instrument or an agreed outcome with legal force under the Convention decision applicable to all Parties” represents a long overdue acknowledgement that the Convention and the Kyoto Protocol are insufficient, if the ultimate objective of the Convention is to be achieved.

“This decision was largely applauded and received with high expectations, especially from those countries such as The Gambia that are bearing the brunt of the impacts of climate change.

“The world’s resolve to seriously combat the adverse effects of climate change will be tested here in Paris. The science is settled. The problem of climate change is sufficiently understood. Numerous studies, both recent and in the past, indicate that projected greenhouse gas emissions will have detrimental effects on human and economic activities throughout the world.

“It is also widely understood that greenhouse gas emissions are not declining. There still remains a significant gap between the mitigation pledges put forward and the emission reductions required.

“As of today, 185 countries (including the European Union) have submitted contributions to the 2015 agreement. Though these contributions cover the vast majority of emissions, the reductions they indicate are not enough.

“We must then ask ourselves - do we have the political will to increase our ambition?  Will we adopt an agreement here in Paris that facilitates the ratcheting-up of our collective ambition?

“Allow me to now speak about my country The Gambia. My country is among the smallest countries in Africa with its economy highly dependent on rain-fed Agriculture, hence making it highly climate sensitive.

“The projections are clear on what will happen to my country with regard to sustained food security and livelihood, if global temperatures continue to rise.

“About two thirds of our Capital is below 0.5 meters above sea level; hence its vulnerability is no longer in doubt; what, therefore, is needed by The Gambia is how to combat sea-level rise and build the resilience and adaptive capacity of our people and communities.

“The Gambia is not alone in these circumstances; as this reality is also happening elsewhere in the West African communities affecting both coastal and inland areas.

“From my own experience, I know that ambitious national commitments can be put forward even in the face of these difficult national circumstances.

“The Gambia contributes about 0.01 per cent to total greenhouse gas emissions. The impacts of global warming and climate change in our country, however, do not correspond to our contribution to the problem.

“In spite of this, the country has tasked itself through its submitted INDC to drastically reduce greenhouse gas emissions from key sectors of its economy by 44.4 per cent in 2025 and 45.4 per cent in 2030 with domestic and international support.

“This demonstrates that if my country - who is the least responsible for the problem and whose priorities should really focus on adaptation and the socio-development of its people - if we can take these bold steps, then developed countries and those increasingly contributing to global emissions have the moral obligation to do more.

“In addition to our pledged mitigation efforts, I am pleased to inform you that our regional organization, ECOWAS - being cognizant of the high vulnerability of communities in West Africa to climate shocks - has finalised the formulation of the ECOWAS Meteorology (weather and climate services) Programme and its Implementation and Resource Mobilisation Plans, and execution is expected to commence in 2016.

“At the national level, The Gambia has also been implementing adaptation projects from our NAPA, projects such as the Climate Change Early Warning Systems, which is currently in its second phase, and the Coastal Protection and Resilience Building of vulnerable Coastal Communities Project are being implemented.

“Furthermore, due to the low-lying nature of the Gambian coastal zone, we are also implementing an Integrated Coastal Zone Management Programme, whilst at the same time developing a climate change policy which will streamline climate change issues into the national development processes.

“The efforts and resources we have spent on adaptation will be meaningless if there are no tangible actions on mitigation to reduce the greenhouse gas concentrations in the atmosphere.

“Developed countries and other countries in the position to do so, need to take meaningful mitigation actions to keep temperature rise to below 1.50C.

“However, we must also remember that adaptation has a limit.  I am, therefore, looking forward to the adoption of an agreement that covers loss and damage, in addition to mitigation, adaptation and the means of implementation.

This is the call of The Gambia’s delegation to COP21, trusting that our concern which represents those of the vulnerable communities will be addressed through a fair, equitable and robust Agreement in Paris.

“Indeed, let’s be able to say at the end of this week, ‘at last, Paris has produced the Agreement that represents the aspirations and addresses the concerns of those who emit the least, yet are the most vulnerable’.

“On that note Honourable Ministers and distinguish Delegates, I thank you very much for your attention.”

Theft and Conspiracy to Steal