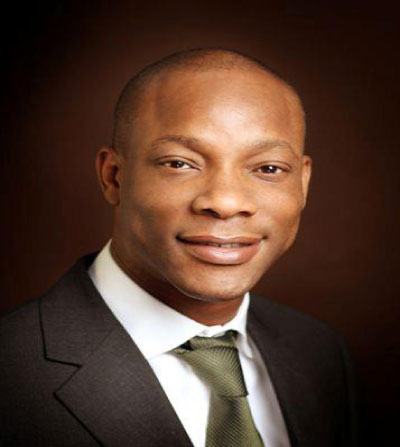 The Board of Guaranty Trust Bank plc has announced the appointment of J. K. Olusegun Agbaje as the Managing Director/Chief Executive Officer of the Bank, subject to approval of the Central Bank of Nigeria (CBN).. His appointment, according to a statement from the bank, was ratified at the meeting of the Board held on Wednesday, June 22, 2011, to fill the vacancy created by the death of the former Managing Director, Olutayo Aderinokun.

Prior to his appointment, Mr. Agbaje served as an Executive Director of the Bank from January 2000 and was later appointed Deputy Managing Director in 2002, a position which he held until April 2011, when he was appointed as Acting Managing Director following the absence of the late Mr Aderinokun on medical leave.

With over 19 years of investment and international banking experience, Mr. Agbaje has earned a reputation as a truly accomplished and highly respected professional giving his diverse experience in the financial services industry.

“Mr. Segun Agbaje is the natural successor to Mr. Aderinokun in line with the well defined succession plan of the Bank,” chairman of the bank, Oluwole Oduyemi said. “Mr. Agbaje has an enviable mix of experience, dynamism and versatility in addition to a remarkable track record in the Financial Services Industry. Mr. Agbaje possesses the core values upon which the Bank was founded as enshrined in the Code of Corporate Governance of the Bank. The Board believes that Mr. Agbaje has the capacity to add immense value to the Bank and will offer him all the necessary support he needs to succeed in his new position.”

Mr. Agbaje joined Guaranty Trust Bank as a pioneer staff in 1991, after a rewarding stint at Ernst & Young, . He subsequently rose through the ranks to become an Executive Director in January 2000 and Deputy Managing Director of the Bank in August 2002. His experience cuts across most aspects of the Bank’s business, including commercial banking, investment banking, treasury, corporate planning and strategy, settlements and operations.

Mr. Agbaje possesses a deep understanding of the Nigerian business environment, having led the execution of large and complex transactions in financial advisory, structured and project finance, balance sheet restructuring, debt and equity capital raising in the Nigerian Energy, Telecommunications, Financial Services and Manufacturing sectors. In addition, he helped develop the Interbank Derivatives market amongst dealers in the Nigerian banking industry and introduced the Balance Sheet Management Efficiency system.

He has been very instrumental in the bank’s foray into the international capital markets over the years, which has translated into a US$350 million Regulation S Eurobond in January 2007 and a US$750million Global Depository Receipts (GDR) offer that same year, whose listing on the London Stock Exchange made Guaranty Trust Bank the first Nigerian company and African bank to be listed on the Main Market of the London Stock Bourse.

In 2011, he further led GTBank to launch the first Sub-Saharan Africa financial sector benchmark Eurobond when the Bank launched its USD500million Eurobond without a sovereign guarantee or credit enhancement from any international financial institution.

He is an alumnus of the and holds a B.Sc and MBA from the University of San Francisco, USA.

Until his recent appointment, Mr. Agbaje was Acting Managing Director of Guaranty Trust Bank plc, a position he was appointed to in April 2011, following the absence of our late Managing Director/Chief Executive Officer on Medical Leave.