A-four-day nationwide second round immunisation on polio targeting 39,1425 children across the country will on 29 April 2011 kick off, according to health officials.

Speaking at a reorientation meeting with members of the Association of Health Journalists (AOHJ) on 25 April 2011 at the Kanifing Municipal Council (KMC), Yorro Jallow, manager at the Health Education Unit, said it won’t be the first time they would be conducting such an exercise. He says they cannot do it all alone, which is why they are collaborating with their sister partners.

He also thanked the media fraternity, both print and electronic, for their wide range coverage, saying: “This is a clear manifestation that the media is contributing their quarter in the development of the country.”

Lamin Ceesay from the EPI Unit says the role of the media is very important in the sensitisation and promotion of polio immunisation to the general public. “I hope with the support of the media everything will go well,” he said.

Mr Ceesay also spoke about personal hygiene, saying that “if faeces mix with water or food, when it enters the body it can cause polio”. He urged all and sundry to be using water with soap to wash their hands before eating or after using the toilet.

Pa Ousman Manneh from Unicef, in his remarks, commended the media for doing “well in the first round of the immunization”.

Fatou Touray, president of the Association of Health Journalist (AOHJ), said: “This has been a long partnership and we have been doing well and will continue to do that.”

Other speakers at the meeting included Sarjo Darboe from the Regional Health Management in KMC, Omar Badjie, Yorro Bah and Rohey Njie, all of the Health Education Unit.

Towards a Child-Centric Human Rights Culture 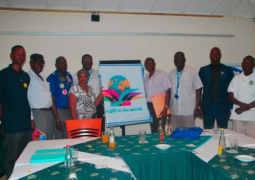