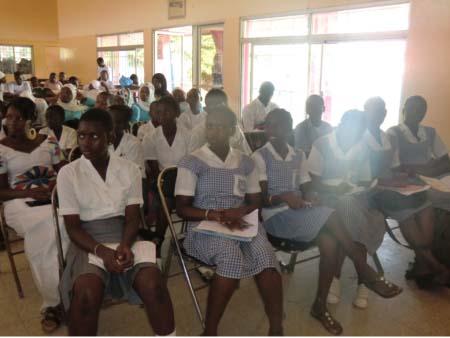 Second Chance The Gambia, a non-profit-making organization based in The Gambia, last Friday commenced a four-month sensitization campaign on smoking and drug abuse among schoolchildren.

The campaign, launched with a seminar held at Marina International School, brought together students from different schools.

Funded by the US Embassy, the campaign seeks to fight against drug abuse in the country, especially among school-going boys and girls.

According to the Second Chance officials, the primary objective of the initiative is to inform heads of schools, teachers, students, parents and the youth on the effects of smoking and drug abuse and to highlight the role of all in the fight against, drug abuse, trafficking and crime in general.

Speaking at the opening ceremony, the executive director of Second Chance The Gambia, Lamin Hassan, said it is in line with their vision to create a community of restoration for all those involved in and affected by smoking, drug abuse and crime.

According to Mr Lamin, it is expected that the project will lead to the implementation of a one-year pilot programme that will seek to rehabilitate and reintegrate addicts into the society through employment.

He recalled his personal experience as a former cigarette smoker and one-time prisoner and advises students to desist from drugs and crime.

He said Second Chance The Gambia will be embarking on all school awareness campaign to sensitize, particularly school-going children to avoid misusing themselves through such drugs.

The best tool to do that, Mr Lamin noted, is to engage the youth in dialogue and sensitize them to also share ideas and experiences with them to find the best way forward in their interest.

Second Chance The Gambia will be going from one school to another and to communities with different facilitators who are expert in talking about the effects of drugs.

He then used the opportunity to thank the US Embassy for sponsoring the project, saying that at the end of the project it would make a positive impact on the youth.