A date has finally been set for the one day Scrabble tournament organised by the National Sport Council in collaboration with Rainbow Scrabble Club.

On Saturday June 13, 2009 at the Independence Stadium in Bakau, Clubs and Individuals will line up for the cracker.

In an interview with Pointsport yesterday the Co-coordinator of the event Mr Bernard Jonsyn said at the moment the clubs have started their registration and there are rules and regulations set for the tournament noting that the registration fee is D50,00 for clubs and individuals who wish to join the competition.

He stated that the cash prize and winner and the runner up prize will be solely sponsored by West Coast Radio adding that the rules and regulations of the tournament are as follows : player has 2mins to make a complete move or misses turn.

He said among the rules includes player loses his/her turn to play if wrong tile connect on the board is made, once tile joined word is formed it can't be changed.

Mr Jonsyn said the occasion is expected to be graced by the Minister of Youth and Sports, Honourable Sheriff Gomez. 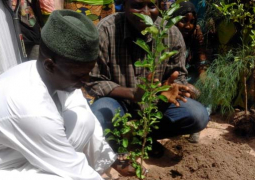