The Scorpions of The Gambia will be working towards taking their first victory against the Fennecs of Algeria in the combined African and World Cup qualifiers tomorrow at the Independence Stadium in Bakau.

Coach Paul Put is conscious of this fact and has informed Pointsports in an interview yesterday, that he has given everything he has to the boys in the training ground but their has to be results.

He said what is most important is that everybody should defend, attack, score goals and win.

Put added that both and are well experienced and mature but the Scorpions performance in their last two games was very encouraging and should be maintained.

Putalso said that he is working with Pa Modou Jagne and it could be a possibility to start him in place of Pa Saikou Kujabi.

He said the Scorpion's weekend game will be difficult and could be termed a killer game due to its importance. "We know that we have to win to go into the qualifiers"

Commenting on the arrival of the players who are returning from suspension under Caf he said,"I did not have the opportunity to know them. They will have to prove themselves if they want to be part of the team composed of many talents. I work based on what I have seen but will not rely on the past to facilitate my work"

His assistant Lamin Sarr, who is part of the coaching staff that supervised the victory over the Algerian side last year, said he is optimistic that come Saturday the Scorpions will beat .

He said The Gambia is aware of their style of play " though during the past matches, we were a bit handicapped. We will miss Pa Saikou Kujabi but other than that the boys are ready for Saturday."

He added during their training sessions, they have worked on the issue of goal scoring and believed that if the boys play with instructions given to them, a difference will be seen on Saturday.

The group is led by with 4 points, are second with 3 points following by The Gambia with 2 points. are last with a single point. 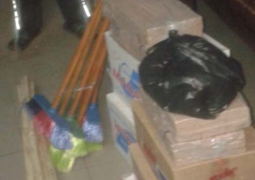