Sansiro FC were reduced to ten men in the 42nd minute of the game when Muhammed Jallow was sent off after being shown a straight red card.

Sanchaba United have now secured three points in one encounter while Sansiro FC are yet to collect a point in a one game.

In the 5pm kickoff of the same, Tigers FC drew 0-0 with Selection FC in a keenly and well contested encounter. Both teams have now collected each a single point in one game.

Speaking to Buba Jarju, head coach of Tigers FC shortly after the game, he began by thanking his players for putting up a respectable performance during the game.

He added that they knew the game was not going to be easy because they train on the same ground with their opponents and also knowing that their opponent’s team is made up of first division players.

He stated that preparation for the game was very intense because they also knew their opponents were coming up with a different team from that of last year.

He also expressed satisfaction collecting a point against Selection FC because they are a much experienced side than his, adding that if they had exposed themselves Selection FC would have punished them.

“We closed the game and frustrated them,” he said, adding that that was the only approach they could use to collect a point.

He also said they would use attacking football in their next game to be able to collect the maximum points because the game (against Selection FC) was their toughest in the group matches.

Ebrima Baldeh, assistant coach of Selection FC, said the game was not easy and they also expected it that way because the two teams are neighbours and train on the same field.

He stated that his players were rushing to get a goal which made the game also hard for them, adding that he was not satisfied collecting a point.

He said they would go back to the training ground to rectify their mistakes and come for the three points in their next game. 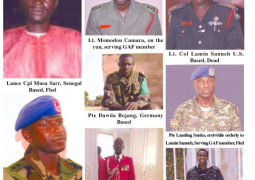