The RailHawks play in Division One of the USL, which is the second-tier competition in the Unites States below the Major League.

"I have enjoyed my trial with the RailHawks and I'm excited to join the team," Touray said. "I'm looking forward to scoring a lot of goals this season," Railhawks.

Though just 20, Touray comes to the RailHawks with an accomplished background. He has featured for s Under-17 and Under-20 national teams. At a four-nation U-17 tournament in , Touray scored three goals in four games, including the lone tally in a 1-0 win over in the final, to lead The Gambia to the championship and earn himself the Golden Boot.

In 2008, he scored a team-leading nine goals and led Wallidan to the Premier League Championship. At the end of the Gambian season, Touray went on trial with the New York Red Bulls in Major League Soccer. He signed with the team in August 2008. He appeared in six matches for the Red Bull Reserves and scored two goals. He returned to Wallidan in 2009 and scored six goals.

It was his time in that led to Touray's initial trial with the RailHawks. Rennie welcomed Touray on trial at the recommendation of his defender, John Gilkerson. Gilkerson was teammates with Touray in .

"He's a player we’ve known about for some time," Rennie said. "He has scored four goals in 90 minutes over two games in our preseason. He's a player that can finish. He's good around the goal and we think he has got a lot of potential. Players who can score are hard to find, and he could be really good."

The RailHawks continues their preseason this week with games against the men's soccer team on Friday in Southern Pines and against the Montreal Impact on Saturday, at . 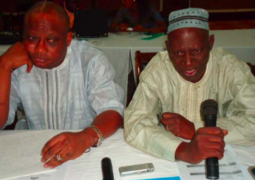