ROC donates half a million dollar to boost higher education

The embassy of the Republic of China on Taiwan, through its embassy in Banjul, on Monday presented a cheque for US$500,000 to the Government of The Gambia.

The cheque, received by the secretary general and head of the civil service, forms part of the ROC’s annual budgetary support to higher education sector in The Gambia.

Speaking on the occasion, Ambassador Samuel Chen, on behalf of the government and people of Taiwan, said he was honoured to present the cheque for assistance towards the development of higher education in The Gambia.

“You know, higher education is very important in this country and is also a fundamental demand to cultivate high-level human resources,” he said.

Ambassador Chen assured the Gambian authorities of his country’s commitment to supporting The Gambia’s development endeavours.

He said the gesture is based on the cordial ties between the two countries, while emphasising the importance of higher education in the development of a nation.

“I am therefore pleased to hand over this cheque for US$500,000 to the secretary-general and head of Civil Service,” he said.

For his part, the secretary general and head of the civil service, Dr Njugo Bah, commended the Taiwanese government and people for the gesture.

The education sector is very important and forms part of the priorities of the Gambia government, Dr Bar noted.

He said President Jammeh has put a lot of resources in the development of the country’s education sector, which includes the offer of free education for girls in the country as well as the sponsorship package he has been extending to many individuals to pursue specialised courses in various disciplines abroad.

Developing the country requires the support of partners and true friends like Taiwan, Dr Bah avers.

Ambassador Chen was at State House with the Charge d’Affairs at the Taiwanese embassy, Tom Lee. 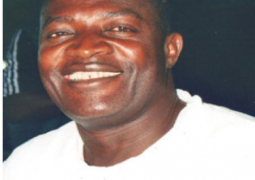