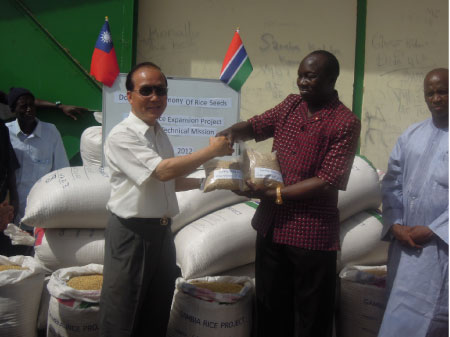 The Embassy of the Republic of China (Taiwan) last Friday donated 1,783 metric tonnes of rice seeds to the Government of The Gambia through the Ministry of Agriculture for further distribution to farmers affected by last year’s crop failure.

According to a press release issued by the ROC embassy yesterday, the donation, made by Ambassador Samuel Chen, was received by the Minister of Agriculture, Solomon Owens.

Speaking at the handing-over ceremony, H.E. Samuel Chen, ambassador of the Republic of China (Taiwan), said the gesture was in line with the bilateral cooperation agreement of “Upland Rice Expansion Project (2009-2012) between the two countries.

“Echoing on H.E. the President Sheikh, Professor, Dr Alhaji Yahya A.J.J. Jammeh’s call for Gambians to eat what they grow and grow what they eat,” Ambassador Chen said, “Taiwan, as The Gambia’s most faithful friend, will make every effort to help The Gambia to strive forward for self-sufficiency in food provision,” the release added.

Minister of Agriculture Solomon Owens, in receiving the rice seeds, expressed his gratitude on behalf of the Gambian government, saying the Gambian farmers’ receiving this quantity of rice seeds can sufficiently provide 28,000 hectares of land for rice planting this year.

He recalled the Ministry of Agriculture’s receipt also of 1,300 metric tonnes of fertilizers from Taiwan in May this year.

Dr Babagana Ahmadu, FAO Representative in The Gambia, said he was very glad to witness the presentation of rice seeds, adding that agriculture is the most important driving factor of The Gambia’s GDP.

He said the timely delivery of essential rice seeds will help The Gambia Government in its efforts at recovering from last year’s crop failure.

The donation of the rice seed was held at the headquarters of the Taiwan Technical Mission (TTM) in Sapu on June 8.