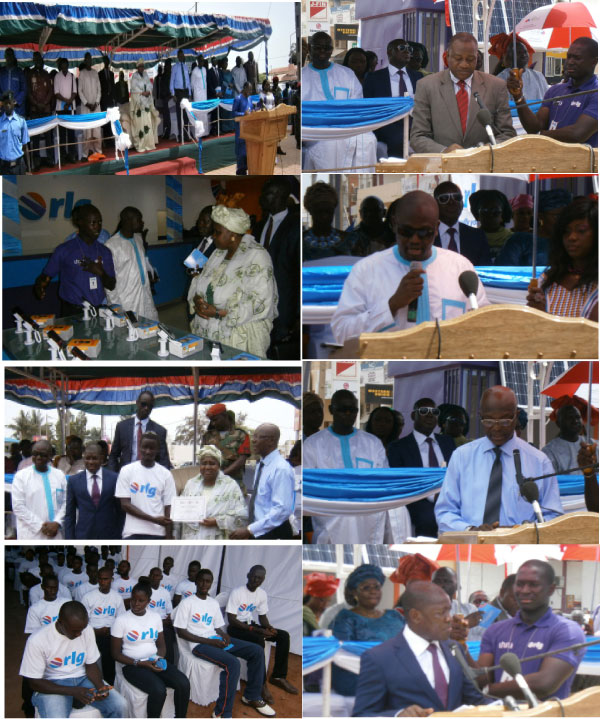 The Vice President and Minister for Women’s Affairs Saturday presided over the official inauguration of rlg Gambia, a first class mobile phone and laptop assembly plant at a ceremony held at its headquarters along Kairaba Avenue.

A subsidiary of rlg Communications group headquartered in Ghana, rlg Gambia is headed by Papa Yusupha Njie as its executive director.

The group is engaged in the production and sale of communications equipment such as mobile handsets, electronic notebooks, tablets, laptops, LCD TV monitors and other accessories.

Besides the product range, rlg is also engaged in capacity building and training programs including its Mobile Phone Repair Training Program, through which rlg has had a presence in The Gambia since 2010.

In her inaugural speech on behalf of President Jammeh, the Vice President said in this day and age, no nation can develop meaningfully without embracing Information Communication Technology (ICT).

According to her, it is against the background of this recognition that government continues to accord high priority to ICT by investing in human capital formation, creating the necessary infrastructure and the enabling environment for this indispensable part of our development process.

Noting that the event was an integral part of the country’s ICT agenda and indeed apt and timely, the Vice President said as a further testimony to government’s commitment to ICT, Unique Solutions Company Limited and the Gambia Priority Employment Programme (Gamjobs) under the ministry of Trade after having signed an MOU, trained 70 Gambian youths in mobile phone maintenance, repairs, servicing, assembling and entrepreneurial skills at the Unique Solutions head office in November 2010.

She stated that the main goal of this public-private partnership is to equip unemployed Gambian youths with specialized employable skills in mobile phone repairs and entrepreneurial skills that will make them socially responsible, financially independent and ultimately offer them the needed future job security.

The Vice President emphasized that government will continue to create avenues for the young people to partake in paid or self employment not only in ICT but in agriculture, other service industries and fishing among others.

She called on the young people to take advantage of the opportunities created by the government in these sectors so as to enhance our collective productivity towards the realization of our Vision 2020 objectives.

Government, she went on, will not be short of commitment in these endeavours and the sky will always be the limit in the promotion of the well-being of the Gambian population.

For his part, Papa Yusupha Njie, Executive Director, rlg Gambia Ltd said, their mandate at the beginning of this project was to deliver the training, but from the onset it has been their fervent wish to make a genuine difference in the lives of these 100 young men and women, one that aims to secure the future of the trainees after graduation, instead of the norm of releasing graduates into the real world with no outlined plan for the future.

Njie told the gathering that the pilot project was to build on the Ghanaian success story on the training of youths in the repairs, servicing, maintenance and assembling of mobile phones and subsequently, establishing Sales and Service Centers and ‘Deskbound Umbrella Project’ for the trainees to move directly into the world of employment.

“We have been working with rlg Ghana to setup a Gambian subsidiary called rlg Communications Gambia Ltd. aimed at building a 1st class mobile phone and computer assembly plant, following in the footsteps of the assembly plant in Ghana and the upcoming one in Nigeria,” he said.

According to him, the plant has the capacity to produce 500 phones a day and 200 laptops with a high focus on quality of service.

‘Made by us for use by all! Products will carry a one year warranty. We want to bring to the Gambian people a culture of service that is first to none. Upgrade old phones to new models etc,’ he stated, adding that the rlg group has been in existence for more than a decade, during which time operations have expanded beyond the borders of Ghana to Nigeria, Kenya, China, and Dubai.

The aim, he added, is to use the plant in The Gambia as an export hub to enter into the rest of the sub-region using the Gambia’s strategic advantage as a sub-regional trade gateway namely Senegal, Liberia, Sierra Leone.

‘The “Connect Gambia - Vision 2020” project, partnering with the government of The Gambia in providing Gambian assembled laptops, connected to the internet for every Gambian student going to primary, high school and university by 2020 is one that we hope can be replicated across the sub region, creating more jobs through the assembly plant, service centers, and training programmes, Njie stated.

‘In partnership and with the support of Trust Bank, Gambia accounts have been open for assembly plant workers and a donation of D3000 by TBL to each account as opening balance for the graduates as they wait for their first salaries as workers.

Mr. Roland Agambire, Chairman, AGAMS Holdings and CEO, rlg Communications Ltd said Ghana and The Gambia have had political, diplomatic and economic relationship as far back as days prior to the founding of both the OAU and ECOWAS.

This relationship, he said, has benefitted both countries in diverse ways and till today, each country see the other as strategic in the current scheme of things.

‘Three years ago when I had the opportunity to address the graduation of our first ICT training in The Gambia, I made a solemn promise to use my vision and talent to help in the implementation of the west Africa’s integration process,’ he stated.

According to Roland, he made a promise to create jobs for one million West African youth within 5 years and until he does that, his soul will never rest.

“Today, I am delivering the promise I made especially to Gambians. The opening of the Assembly Plant today is a result of years of planning which is part of my vision to first of all create an African brand worthy enough to compete with any other brand globally. It is also in line with what many described as an ambitious pledge to create jobs for at least 1 million youth in West Africa within the next five years”, he added.

Most importantly, he went on, it is my vision that by pulling resources and collaborating, we will be strengthening the economies of our various countries and builds a resilient one for the sub-region.

‘By sitting this ultra-modern Assembly Plant, offices, training center and showroom here, rlg will be seeking to make The Gambia as an export hub to enter into the rest of the sub-region using the Gambia’s strategic advantage as a sub-regional trade gateway,’ he said.

Roland noted that in terms of products, the plant will produce top-of-the-line ‘Assembled in The Gambia’ mobile phones, laptops, desktops, internet modems, LCD TV screens and internet routers that will surpass all measurements of dependability and reliability.

He challenged the people of The Gambia to show patriotism and patronize what is made in their own country, even if the standard does not match the others, noting that it only takes a matter of time to get things right. This, he added, is how all well-known global brands started.

Nana Grey Johnson, Minister of Information and Communication Infrastructure, said the establishment of an ICT devices assembly plant in The Gambia is indeed a dream come true.

According to him, after recognizing the indispensable role and influence of ICT in the quest to develop our country, government in 2002 created the Ministry of Information and Communications Infrastructure to coordinate the prolific growth in the communications, information and technology (notably information technology) industries.

The ministry, he added, was charged with the responsibility of developing policies and regulatory frameworks to facilitate orderly growth in the communications industry and to manage telecommunication resources including the radio spectrum.

He noted that the setting of this plant will provide us with the trained manpower needed to drive our ICT agenda and also offer us choices in the world of ICT devices, saying that the jobs to be created out of all these are of paramount importance to the government.

This, he said, is because youth unemployment has been painstaking issue for us.

Madam Victoria Hammah deputy minister for communications of Ghana, who also graced the inauguration, said the power of the ICT has been evident in countries that had the privilege and also saw the need to embrace it in their early stages.

‘I dare say that we in developing nations need ICT to facilitate over growth agenda the more than others. In all spheres of life, ICT has proven to be vehicle to attain greater efficiency,’ she stated.

According to her, the International Telecommunications Union of the United Nations estimates that African countries will need an expanded ICT infrastructure to sustain her current growth strategies.

This, she went on, is where efforts such as the one we are witnessing today ought to be embraced by all. ‘The commissioning of the facility in this country will among other things open up the local market in the area of ICT devices and accessories, capacity building, knowledge transfer and most importantly job creation.’

Rashid Pelpuo, Minister of state at the office of the President in-charge of public private partnerships of Ghana, said the people of Ghana are indeed happy to be exporting this innovative concept, skills and investment into The Gambia with the firm believe that the youths of West Africa will take advantage and embrace themselves for the difficult and challenging task of growing and expanding the economies of our various countries and that of the sub-region as a whole.

Other speakers at the inauguration include Fatou Lamin Faye, Minister of Basic and Secondary Education; and Kebba Touray, Minister of Trade, Regional Integration and Employment.