Ousainou Cham, the Regional Forestry Officer for Central River Region has urged people of the region to create fire belts around their villages or settlements to prevent unexpected bush fires from infringing their villages. Mr. Cham made this statement in an interview with our correspondent at his office in Janjangbureh recently.

According to him, fire becomes very dangerous when it is out of control, especially bush fire, which mostly consumes shrubs and juvenile trees that are to replace old and dried ones for continuation of life. He underscored the importance of the forest to the livelihood of the people.

He pointed out that people should be more careful when dealing with fire in their homes, avoid unnecessary fire outbreak, which only worsen the poverty stage of the victims household, thus threatening the struggle for poverty reduction as enshrined in the Poverty Reduction Strategic paper (PRSP).

When bush fire strikes, Cham added, there is always huge negative impact on the forest, as young trees and some soil nutrients are lost in the air, leaving the soil to be exposed leading to erosion and infertility which can result in desertification.

"Not only the forest suffer from this but equally the human populace and their livestock since they either directly or indirectly depend on the forest survival," he lamented. He noted that at this time of the year, there is news about fire outbreaks but at times its causes are unknown.

"Fire doesn?t happen automatic it has to start somewhere," he added.

Regional Forestry Officer Cham urged all stakeholders, line departments, local authorities and the communities to work hand-in- glove with his office in maintaining the forest green and act as police officers to monitor and report any illegal practice in the bush.

According to him, anyone found wanting would be dealt with.

He commended the people of CRR for their cooperation and support during communal works. 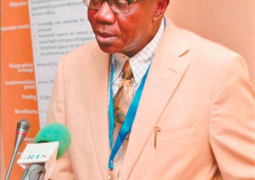