There has been a startling revelation as the criminal trial case involving expelled for Nainija, Dawda Manneh, and ex-soldier Demba Baldeh, continued at the Banjul Magistrates' Court before Magistrate Edrissa Mbai.

In his testimony Pw2, Pa Modou Jarra, told the court he is a drug officer stationed at the National Drug Enforcement Agency headquarters in . He said he recognised the accused persons and on , he was called by his Commander to investigate the matter and record the statement from the 2ndaccused Demba Baldeh. He added that he cautioned Demba Baldeh in the presence of an Independent witness before obtaining the statement from him, adding that it was read all over to him which he agreed and thumb printed while the Independent witness signed. He adduced that during the interrogation Mr Baldeh told him he knows the 1staccused Dawda Manneh when he Baldeh was in the military while Dawda Manneh was working for the agriculture department in the provinces.

Further testifying PW2 informed the court that Baldeh told him that on he was coming from Tujereng when he met Dawda Manneh at around the Brusubi roundabout and told him that he had some items for his family in the provinces. He said Demba Baldeh also told him that he told Mr Manneh that he had oil, sugar and 13 bundles of cannabis which he wanted to take along. He said he was told by Mr Baldeh that Mr Manneh accepted and they made an agreement in which he Baldeh gave Manneh the sum of D2500 for fuel and repair of the vehicle before departure. Officer Jarra further revealed he was told by Baldeh that while on their way Manneh was not confident in vehicle because of the scent of the cannabis, adding that upon reaching at Sololo check-point the vehicle was stopped. He said according to Baldeh it was Dawda Manneh who introduced himself to the officers as a Parliamentarian, and later the vehicle was searched and 13 bundles of cannabis were found in a brown bag wrapped in black plastic bag. He said Baldeh told him that he was arrested along with Dawda Manneh to Bansang police Station. He said the vehicle belonged to Dawda Manneh and was in the custody of NDEA.

Adducing further PW2 Pa Modou Jarra told the court that on , Demba Baldeh was again brought from Mile 2 Central prison for further questioning before obtaining from him another statement. 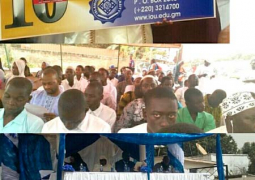