Over the past couple of months things have not be en smooth at the Basse Area Council in the Upper River Region.

It looks like there is an internal conflict between local authorities in the region, which has started to surface.

Local area councillors are elected by the people to serve them, and any decision taken by them must be respected since they are acting on behalf of the people.

We were informed of instances were payment of councillors allowances, including the chairperson’s salary were delayed for a while at the said council.

In fact, it would be recalled that councillors of the said council at one time complained about the chief executive officer (CEO), director of Finance, and  internal auditor of the council, who with effect from 1st August 2011 failed to provide an audit report after seven months, despite several meetings held by members of the council.

If this was really the case at the time, and with many allegations emanating from the region, one could simply stress that there is something fundamentally wrong in democratic dispensation in the Upper River Region.

For whosoever is to blame, be it an individual or group of people that are responsible for the mess, only a genuine investigation could prove that.

The Local Government Act (LGA) has clearly spelt out the operational guidelines of area councils. It even states that (a) the Area Administrator otherwise the commissioner except in the case of Banjul and KMC shall draw the attention of the Auditor General to the  need for special investigation audits of the Local Government Area; (D) draw the attention of the Ombudsman to the need to investigate any cases of mismanagement, maladministration or abuse of office.

Meanwhile section 168 (1) of the LGA further states that “Subject to this section, no civil or criminal proceedings shall be instituted against a member of a Council or officer for acts  of the Council in any court because of anything said by him or her in the Council or any matter or thing brought by him or her before the Council by petition, motion or otherwise.

(4) Where a member refuses to render an apology in accordance with subsection (3) of this section, the Chairperson shall suspend that member for the duration of two consecutive meetings of the Council.

These and many other sections have clearly spelt out the Privileges and Immunities of the members of the area councils.

Basse Area Council as a matter of fact is not the only area council in the country, and we are, therefore, very much concerned as to why the said council is seemly problematic and not the others.

We therefore urge that the matters of Basse Area Council be properly looked into in accordance with the Local Government Act of 2002. 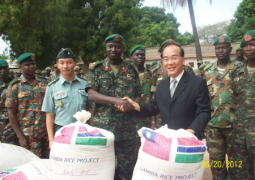