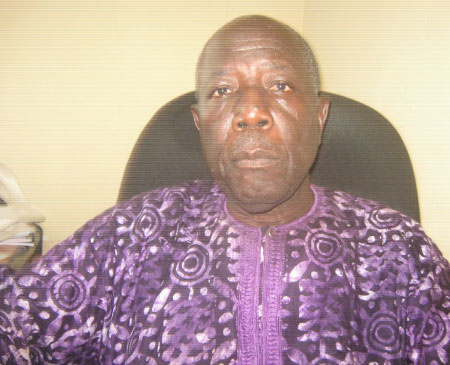 A good teacher is like a candle - it consumes itself to light the way for others.- Mustafa Kemal Atatürk

Amongst the people who have made a lasting impact on my life, John P. Bojang stands out unique and very special. He touched my life when it was most tender, and the impact will surely outlast my own earthly life.

At the time of his demise in November 2011 John P. Bojang was the Chairman of the National Council for Civic Education (NCCE). He had previously served as Trade Minister at the advent of the July 22nd Revolution in 1994. He subsequently served as The Gambian Ambassador in , , , and the . Mr. Latirr Carr studied in when Mr. Bojang was ambassador to that country, hailed him thus on his facebook page: “He has always inspired the young to be all they can be and has touched the lives of many.”

He certainly did serve his country well. But of his many, it is my conviction that his greatest legacy would be his long and distinguished service as a teacher and the many lives he has touched in that process. Our paths crossed when he was Headmaster of Saint Peter’s Primary School in Lamin, where I did my primary school education.

When a group of my former classmates that went through Saint Peter’s Primary School ( ) converged in , to attend my wedding party in 2008, a whole night’s conversation was dominated by the great work of Master Bojang. Two full decades after graduating from Primary School, our memories were still vivid about all the great things that he did for us and the many other thousands of students that went through his school. Master Bojang was not only a great teacher but also a master manager and administrator. Of all the complaints of lack of furniture in schools before the Jul 22nd Revolution, the student of Lamin School never experienced this problem because Master Bojang spearheaded a parent-teacher collaboration that led to the sustainable acquisition of quality furniture and infrastructure through self-reliance initiatives.

Time was when passing the Common Entrance Examination used to be a do or die task for parents and students before the advent of the Basic Cycle system in our educational policy. Of the many thousands of students that had to take this exam, only a few would “pass” to earn places in the limited high schools in the country. Lamin School was one that had some admirable pass rates given the location and income group of the students and their parents.  Master Bojang would not only teach and also coordinate cost-free extra classes, but he would go at length to pray for his students and also seek prayers from others for his students to be successful in their exams. He related to his students as a father, certainly he was more concerned about our success than some of our own biological parents.

He had taken extra interest in me due to my great performance in exams through the first four years I spent at his school. During the first few weeks of my fifth year, he walked into my class and demanded that I be moved to the sixth grade immediately. Fearful of the risk of not being able to pass the Common Entrance Exams, my parents did not like the move. But with a strong faith in my potential, he was able to convince my parents to let me skip the fifth grade and go to Primary 6. Master Bojang had more confidence in my abilities than I did myself. With his guidance and moral support, Allah helped me to pass the Exam and proceed to high school, thereby shortening my educational journey by a full year and I cannot quantify the great benefit that has brought me and my family. Master Bojang was a living testimony to the wise words of Dan Rather who once said “the dream begins with a teacher who believes in you, who tugs and pushes and leads you to the next plateau.”

As Head Master, he could have confined himself to his office and simply supervise his team of competent teaching staff but his dedication to duty and love for his students would not let him stop at that. He would teach classes himself, especially for the final year students. He taught us not only the knowledge of books; he also used our weekly assemblies to teach us valuable life skills. In a manner unique and effective his masterly addresses during school assemblies have been both sources of enlightenment and at the same time great fun.

During one of our biweekly school assemblies, he spoke at length on the need for unity amongst the student body.  Master Bojang was dismayed at the fact that when we prayed in the Christian way at the beginning of assemblies on Mondays, the Muslim students would not participate in the prayers but stood mute while the Christians prayed. The same was true of the Christian students, when we prayed in the Islamic way on Fridays. He spoke so strongly against this and chided us asking whether we prayed to different Gods? To emphasize his point, he hoisted a primary one student on his shoulders, saying “even this small boy knows that we are all praying to the same one God.” Holding the boy on top of his shoulder he asked him to answer his question so that the entire assembly hears him: “Is there only one God or two?” he asked. “There are two Gods!” the boy replied at the top of his voice.

We all burst into a fit of laughter. The outburst of laughter was so intense that the assembly could no longer be controlled, but the wise old master’s message stuck with us forever: that we are all one people, praying to and serving one God. And John P. Bojang lived his life exemplifying that philosophy. Patriot, scholar, loving father, and man of faith. Rest in peace my good old master!