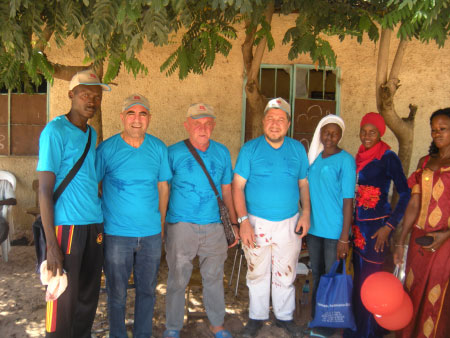 To mark the Muslim feast of Eid-ul-Adha locally known as Tobaski, Cemiyetul Hayre Relief Organisation, in collaboration with IGMG HASNE, a Turkish Islamic organisation based in Germany, last Thursday distributed 250 bulls to Muslims in The Gambia

Speaking at the presentation ceremony held at the Abuko Abattoir, Baba Kujabi, the Secretary General of the organization, said the organization was founded in the year 2000 by Turkish Muslims in Germany with operations in Europe.

According to him, the organization has now spread its tentacles all over the world, and this year, a total of 700 heads of cattle was distributed in The Gambia in commemoration of the Tobaski feast.

Kijabi told journalists that the organization also renders support to Muslims during the month of Ramadan, as well as supporting orphans in the country.

Also speaking at the ceremony was Oustass Chebo Cham, who urged the Muslims to emulate the organization.

Oustass Cham underscored the importance of sharing, noting that as Muslims, we should help each other at all times.

“Allah promised in the holy Quran that any Muslim who is bent on helping the orphans and poor, will enter paradise,” he said, adding that Tobaski is a day when every Muslim should be happy.

Also speaking at the ceremony was Oustass Momodou Salif Bah, who underscored the importance of Muslims helping each other, noting that the rich should help the poor because Islam preaches love and unity.