As the war of words for leadership position at The Gambia Supreme Islamic Council (SIC), the country’s main highest Muslim decision-making movement continues, there is need for dialogue to reach a breakthrough.This rather unfortunate war of words is only tearing the country’s mainly Muslims majority apart. We are a country of decent people. We have exercised maturity even through the heights of many believes was a herculean task. Let’s exercise the same maturity.

We don’t want to go into all those details between the two parties. But this recent war of words started after what in legal term- the end of term of the current president of SIC in the person of Muhammed Lamin Touray. And he is still occupying the post with no dates for the congress.

Few weeks ago, Rawdatul Majlis, another Islamic movement established in 2017 unanimously selected Sheriff Sanusi Nano Hydara as the president of the Supreme Islamic Council. This move was rejected by leadership of the SIC, as they believed selection of a leader of the council must be in conformity with the laws of SIC and any act that contravenes the laws of the organisation is regarded null and void.

They also questioned the credibility of the Rawdatul Majlis as the movement is not a registered member of the SIC and so only registered Islamic Organisations have a say in the selection or election of any leader of the organisation.

However, Rawdatil Majaalis on the other hand observed that Supreme Islamic Council is being used as a domestic piece of property confined to just a few set of people. The movement remains adamant that the selection and appointment of Alhaji Sheriff Muhammad Sanusi Nano Hydara, the Caliph of Brufut and vice president of Rawdatil Majaalis to lead as the President of the Gambia Supreme Islamic Council remain intact “and it is a turning point in the history of Islamic organisations’ activities in the country.

Islam is a religion of peace, truth and tolerance. This constant loggerhead among the leaders of the same Muslim faith should be amicably resolved. Let’s abide by these fundamental principles and solve our common differences. We must also preach unity, tolerance, honesty and togetherness. The two groups boost of members who are well respected and followed-in and out of the country. We must remember that Islam calls for nothing but peace and harmony.

The constant differences among the venerable leaders and Muslims in the country need to be critically looked at so as find a lasting solution.

Let’s give dialogue chance for reconciliation and build a greater nation based on trust and mutual respect!

“Leadership crisis erupt when people who have not learnt how to obey instructions are given the privilege to give commands. Leaders are experienced servants.” 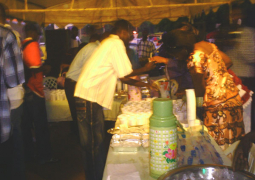 GFA boss commends Future Travel Agency for support to U-20