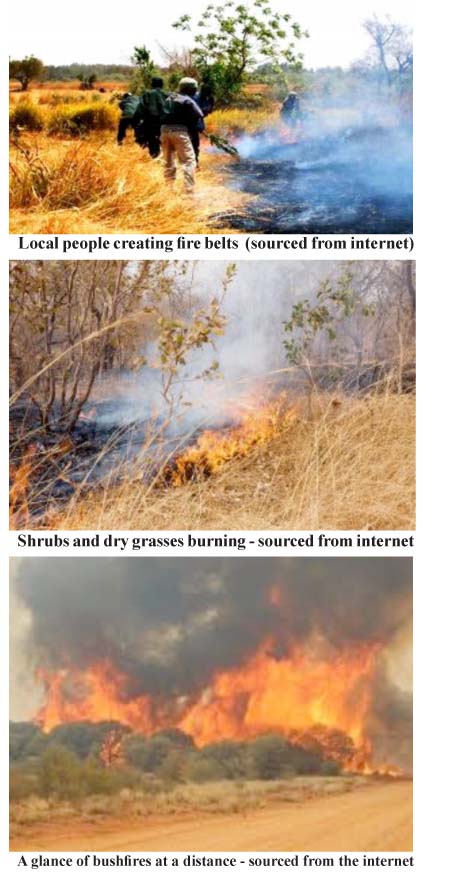 Alhagie Sanyang, the Regional Forestry Officer for Central River Region South, has issued a stern warning to the people of the region to desist from bushfires and any illegal activities in the bush.

He said anyone found guilty of such acts would face the law.

Mr. Sanyang made this statement in an interview with this reporter at his office in Janjangbureh recently.

The interview came as farmers are preparing for the next farming season and the use of fire is unavoidable.

According to him, anyone found wanting would be dealt with accordingly, adding that currently there is a case with the district tribunal on alleged bushfire, and if found guilty the person will pay the price.

“Anybody found culpable of destroying the forest would face the full force of the law,” he stressed.

He said not only the forest suffers from this, but equally the human populace and their livestock since they either directly or indirectly depends on the forest for survival.

Sanyang noted that at this time of the year there is news about fire outbreaks, but at times its causes are unknown.

“Fire doesn’t happened automatic; it has to start somewhere, and since it does not happen magically my office and all stakeholders will continue to be proactive in bringing culprits to justice, if found.”

The peak seasons for bushfires are during the dry season when farmers are busy harvesting, and from May to June when the dominant farming activity is clearing, he pointed out.

Sanyang urged people of the region to create fire belts around their villages or settlements, so as to prevent unexpected bushfires from infringing into their villages.

According to him, fire become very dangerous when out of control, especially bushfires, which mostly consume shrubs and juvenile trees that are to replace old and dried ones for continuation of life.

He underscored the importance of the forest to the livelihood of the people.

Mr Sanyang further pointed out that people should be more careful when dealing with fire in their homes; to avoid unnecessary fire outbreaks, which only worsen the poverty state of the victim’s household, thus threatening the struggle for poverty reduction as enshrined in the PAGE.

When bushfire strikes, Sanyang added, there is always huge negative impact on the forest, as young trees and some soil nutrients are lost in the air, leaving the soil to be exposed leading to erosion and infertility which can result in desertification.

The forestry officer called on all stakeholders, line departments, local authorities and the communities to work hand-in-glove with his office in maintaining the forest green, and to act as police officers to monitor and report any illegal practice, especially bushfires.

He commended the people of CRR for their cooperation and support during communal works, while cautioned the people of the region to exercise extra caution to prevent bushfires.

He also highlighted some of the negative impacts of bushfire, saying it causes low agricultural productivity, exposure of the land, loss of nutrients and other important purposes to human life.

Mr Sanyang further disclosed that most bushfire incidents occur outside the community forest and forest parks, adding that bushfires do not only affect agriculture, but also contribute to environmental degradation.

He added that some community forests and forest parks are being successfully managed.

Forests serve as a bank for people who value it, he said, adding that plans are in the offing to ensure resources are conserved for their availability for generations yet unborn.

He called on the local communities to be watchdogs and to strengthen their efforts to protect the forest by developing fire prevention strategies, such as creating fire belts.

He noted that it is a collective responsibility, and that people should take charge of their responsibilities, saying that communities should be more proactive in protecting the forest and its resources.

The forestry officer stressed on the need to protect the forest from indiscriminate illegal activities, so as to preserve and conserve the remaining natural resources.

He urged the people in the region to report any suspect to a nearby police station.

He appealed to village alkalolu, and urged all and sundry to serve as police officers in tracking down offenders by reporting any suspect to a nearby police station, noting that people embarking on such acts are enemies of progress.

Mr Sanynag added that a series of radio sensitisation programmes were done on bushfires and its dangers when bushfires strikes, and the laws applied to culprits as a deterrent to others.

He noted that plans are underway to embark on further radio sensitisation programmes and community meetings, to ensure that bushfires stop.