A two-day regional dialogue on the 11th EDF on farmers’ perspective on the priorities in the resilience context recently ended at the Sunswing Hotel.

The regional meeting that brought together farmer participants within the sub-region was organised by Regional Network of Farmers and Producers Organizations in West Africa (ROPPA) and the CTA, and hosted by the Ministry of Agriculture in The Gambia.

In his official opening, the minister of agriculture, Mr Solomon Owens, recalled that the government of The Gambia, the ACP-EU Technical Centre for Agriculture Cooperation (CTA) and the European Commission, in partnership with ROPPA, organised two farmers and producer consultations with representatives of farmers’ organizations this year in Brussels.

He went on to say that the development of partnership in agriculture and in designing programmes and projects in the sector are facilitated by governments and farmers organizations to ensure sustainable production and productivity in agriculture.

He said that with agriculture providing food and income to about 70 to 80 percent of the population in West Africa, the initiative has the potential to bring about increased food security, reduction in poverty and improved livelihood.

The minister further noted that ROPPA and its farmer networks such as NACOFAG in The Gambia are making major efforts to advocate for farmers priorities at the highest level of decision making, to guarantee political support and commitment.

He also stated that the challenge for West Africa Agriculture filling the gap between regional food supply and demand is further compounded by the regions’ demography which are characterised by high population growth.

For her part, Madam Agnes Guillaud, EU charge d’ Affair thanked the organizers of this meeting, the ROPPA and the CTA and also the regional institutions who are also involved in the process for having invited the EC to listen to the views of main farmers organization on agricultural development and resilience building in West-Africa and the Sahel.

She further gave special thanks to the Gambian government and his Ambassador to the EU, who accepted to hold the meeting in Banjul.

She also stated that the EU is one of the main donors for crisis response actions, and the first one for food security.

Noting that confronted to this upsurge in food crisis, and looking for enhancing his response capacity to emergency situations but also for addressing the root causes, the EU has put resilience at the centre of its cooperation policies.

According to her, for the EU, resilience is the ability of an individual, a household, a community, a country or a region to withstand, adapt, and quickly recover from stress and shocks such as drought violence ,conflict or natural disaster.

She also stated that EU resilience approach goes beyond emergency response to embrace an objective of sustainable development and poverty reduction fully consistent with EU cooperation policies as established in the Agenda for change.

EU commitment to increasing resilience in the Sahel is illustrated by our participation to the AGIR initiative under the lead of regional institutes like ECOWAS, UEMOA, CILLS and national governments.

EU is proud to have been present since the start of this process aimed to address food insecurity and malnourishment in the region.

She said as part of AGIR process, on the 13th of June the European Commission, with the support of the CTA, organised a conference in Brussels with several national farmers organisations from the region.

The aim of this meeting was to give the floor to West African farmers in order for them to express their views on the paths to follow for enhancing agricultural productivity in the region in a sustainable and inclusive way.

She said the conference was proposed in Brussels by farmers organizations as a means of going deeper in the building of further elaborate proposals in support to sustainable intensification of agriculture in the region, proposals to be discussed in each country and at the regional level in the next few months in the framework of the AGIR national dialogue.

The EU attaches great importance to the active participation of farmers’ representative organizations to the forum which discussed matters related to rural and agricultural development. 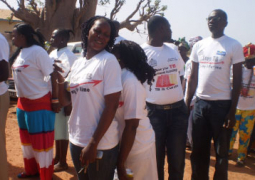