The Bundung Magistrates' Court, presided over by Principal Magistrate Kumba Sillah-Camara, recently heard a raped case brought by the state against one Landing Mboob.


According to the particulars of the offence, on 21st December 2008, at Sukuta village, the accused Landing Mboob was alleged to have had carnal knowledge of an under age girl of 15 years.


When the charge sheet was read to him in the language he claimed to understand, he pleaded not guilty. 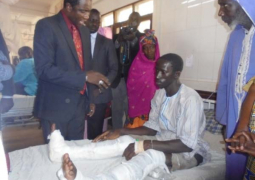