Vision Promotions in collaboration with Gladius and will on Saturday 17th April, for the first time in The Gambia, stage a Queen of Companies Competition which will be held at Jerma Beach Hotel.

In a brief interview with Pascale Schumachers co-organizer and CEO of Gladius Gam Ltd. held at his office, he revealed that the idea behind the show, among other things, was to enable children to go back to school.

"The main idea behind the show, apart from giving employees a bit of fun, is to aid children who are not privileged due to one reason or the other to go back to school. The proceeds from the show will be used to put children back to school."

He went on to add that there are some children in The Gambia who do not go to school, simply because there was nobody to pay their school fees. He opined that every child deserves proper education and that if everything goes on fine a lot of children will benefit from this initiative.

He lauded the companies that are part of the initiative, saying that they are no doubt giving back to the country they are doing business in, by being a part of the event, as their participation will in one way or the other create revenue to send children to school.

The beauty Queens will exhibit their beauty, appearance and brains and will also get the chance to address the audience and promote their companies for three minutes.

According to Mr. Schumachers, this will be a recurring event, which will be held the same time every year with the same slogan: 'VOTE FOR MORE KIDS TO SCHOOL.'

William Brown, President of Vision Promotion, and the initiator of the event revealed that, on more than one occasion, he has come across children who should be going to school, but because of one reason or another cannot.  He said that this, coupled with his desire to see a closer relationship between companies, led him to pioneer such an event.

He said that this will go a long way in complementing government efforts to make sure that every child in the gets an education.

He concluded by calling on all and sundry to come and support this worthy initiative.

"The ticket prices are affordable for everyone, and the cause is a very worthy cause, so I want to call on everyone living here to come and help send children back to school."

The public will also benefit from the event as they can get the chance to vote for their favourite Company's Queen by SMS courtesy of Africell.

They will also get the chance to win valuable prices including a 22 inch AOC TV and Africell credit. 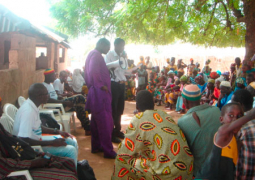