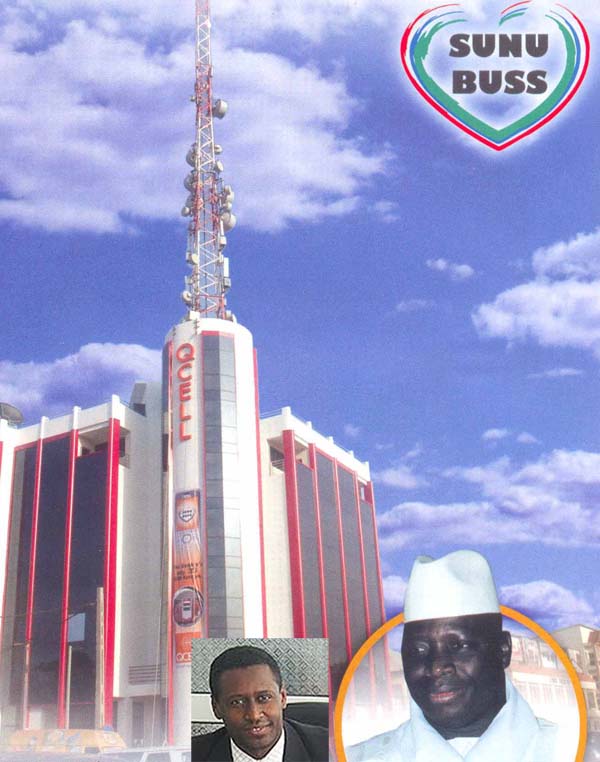 President Yahya Jammeh Saturday 24th July presided over the official opening of Qcell Gambia Limited, stressing that Qcell is the best GSM operator in the country.

"Qcell is the best. If you want to beat Qcell, come with something more than 3G. The sky is the limit and Muhammed Jah is trying to reach the sky by building one of the best buildings in the country," Jammeh said in his launching statement.

According to President Jammeh, the occasion was unique as it represents a significant milestone not only for the giant mobile company but also for his government and the people of The Gambia whose wish of becoming part of the global knowledge society is being fulfilled.

"Thanks to Qcell, The Gambia have joined the rest of the world with the latest technology in the telecommunication. Since its founding a year or two ago, Qcell has been offering a wide range of unique 3G services, never available in The Gambia before," Jammeh said.

While underscoring his government's relent to register more spectacular breakthroughs particularly in ICT in the coming years, President Jammeh said government will also continue to explore new or added frontiers towards fulfilling the aspiration of the sector including the aspirations to ensure that quality ICT services in The Gambia are both accessible and affordable and that the environment is conducive to healthy competition for all operators in the industry.

"In 16 years of the APRC government, huge policy and regulatory strides have been taken to enhance the Gambia's ICT readiness. The results have been astounding, given the breakthrough we have achieved in such areas as internet access, the development of internet Service Providers, Internet Cafes, the expansion of mobile or wireless telephone penetration," he said, adding that the coming of Qcell puts The Gambia closer to her lost glory in telecommunications.

For his part, Muhammed Jah, Managing Director and Chief Executive Officer of Qcell said the launching of Qcell Limited and Qcell House is a cause inspired by President Jammeh in the early days of the July 1994 revolution, when he consistently encouraged every young Gambian to invest his/her wealth, skills, knowledge, discipline for the development of the country.

"As you can see and have seen, Qcell is very much a product of time foreseen by President Jammeh - our time, a success story of our time which is attributed to a three-way marriage between a benevolent economic climate at home, a world economy increasingly transforming into a digital economy, and of course our own personal ambitions and hard work," Jah stated.

He noted that Qcell's expansion bespeaks an economy full of opportunity and potential, widely spread out for the entrepreneurial and the brave of feast in. The official launching of Qcell, the latest chapter in the on-going Q-story, is demonstration enough.

He said the idea of bringing to the Gambians the highest and the best as always put by President Jammeh was a significant triggering impulse which gave their vision its initial fire.

The most common fact about Qcell network, and distinctive only to them is that it?s the only 3G network in The Gambia, with facilities and services that no other operator can offer.

"Despite all the noise around, Qcell was the first GSM operator to make this bold move by promising to always bring you the cheapest tariff ever! Qcell Sunu Buss for the first time in The Gambia has brought down GSM tariff to its lowest, D2.50 per minute, making it cheaper than any network in The Gambia," Jah added.

Also speaking on the occasion, Alagie Cham, Minister of Communication, Information and Information Technology highlighted the significance achievements registered by Qcell since its inception.

According to Minister Cham, government through his ministry will continue to provide the enabling environment for more competition in the market.

It is an undeniable fact that whenever records are broken, especially a record that will positively affect the lives of people, it's worthwhile to recognise and celebrate the event of the record-breaking.

This is so, because it will set a new challenge for the rest to try and break the record and that is what arguably brings about development.

When Qcell Gambia Limited rolled out last year as the fourth and last GSM operator in The Gambia, many lips stirred, murmuring over the wisdom of having a fourth GSM operator owned and operated by young and dynamic Gambians, who were not interested in making noise but giving the best to Gambians.

With a solid investment of over One Billion Dalasis, Qcell Sunu Buss, barely one year after receiving a license from the Government of The Gambia, hit the ground by running with its unique 3G (Third Generation) technology, raising the bar with its new technology thus forcing other operators to raise their game.

Mindful of the fact that communication was more a necessity rather than a privilege, Qcell made affordability a key pillar of its corporate identity - Qcell, the cheapest network in The Gambia. With a strong believe since at the inception that nothing short of the best would do as there was a greater need that Gambians must be given access to these new technologies, which have now become part of the fabric of all modern economies, the impact of Qcell Sunu Buss on the GSM market, after only a year's operation, has been considerable.

The company has become the benchmark of the industry against which other operators will be judged, especially with regard to customer care in which Qcell gets an example for the rest of corporate Gambia. It also combines the dominance of its state-of-the-art 3G system and sophistication for which G3 technology is renowned.

Today, Qcell and the Qcell group has proven to be an unmitigated success. It has introduced its Qcell roaming services with a total number of 550 roaming partners in 208 countries worldwide.

With the Qcell Instant Roaming Sim Card, customers can travel far and wide, and wherever they might be, making calls with ease and confidence.

Even as the company conducts itself with extreme professionalism, it remains committed to being an excellent corporate citizen with a deep sense of social responsibility. Its brand, the Sunu Buss brand is one that prides itself on expanding the world of its customers with all the conveniences of a modern high-tech mobile service.

With Qcell, you can feel the difference. The same is true for, that with continuously improved customer service, state-of-the-art equipment, high quality administrative staff and workforce; they are the team to be! Unlike its competitors, Qcell's products and services is a piece of innovation that exemplifies convenience and simplicity.

It is a gateway to global communications and its reach is roaming service is limited only by the number of countries in the world.

As part of the launching, Qcell presented awards to people who contributed to the success of the company. The first award went to President Jammeh together with a cash price of D100, 000.