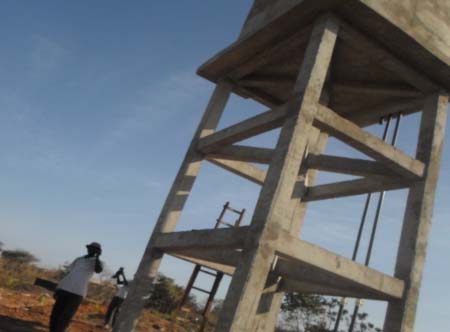 The alternative livelihood component of this NEA/UNDP/GEF Coastal Resilience project is striving to ease climate stress in affected local coastal communities, whose farmlands and rice-fields are affected by the phenomenon of climate change.

The project has rendered to these affected local communities the establishment of modern horticultural gardens for them, as an alternative to the rice fields and farms in the wetlands affected by salt intrusion.

Each of these gardens hosts to an over-head water tank with a capacity for over 15, 000 cubic liters,that will supply running water through laid-pipes to over fifteen reservoirs within the garden, in an effort to provide easy access to water from any position in the garden.

The gardens are expected to serve these communities in both the dry and rainy seasons, as water and security are among the major problems faced by most communities in the sustenance of any project, which is thus adequately addressed.

In addition, all the gardens are fortified with modern fencing techniques that can serve the communities for the next thirty years.

The benefitting communities of the first phase of the project include Touba-Kolong and Illiasa villages in the North Bank, Misira village in Lower River, as well as Bondali-Tenda and Bintang villages in the West Coast regions.

However, the effect and impact of salt intrusion as a result of climate change is serious, and continues to affect livelihood support systems of these communities, and has made them vulnerable to poverty, hunger and food insecurity.

In some of these villages, mangroves and other forest species are dying at an alarming rate, making access to fuel wood and aquatic species such as fish very difficult.

In some communities, particularly the North Bank Region, other alternative income sources such as cashew and mango plantations are dying, as a result of saline soils creeping into previously non affected areas near the coastline.

It is from this backdrop that the project steering committee (PSC) of the NEA/UNDP/GEF project was mandated to embark on a field visit to the project sites, to assess and monitor the current status of implementation of the fencing and overhead water tank constructions.

This gave them the opportunity as project decision-makers to hand over the keys to the gardens to their respective communities, marking the completion of the first part of their garden project.

The team led by the DPS of the Ministry of Environment, Water, and Climate Change thanked the communities for taking ownership of the livelihood support initiative, noting that the project will go a long way in improving their nutritional status, economy, health and the environment.

Addressing communities before handing over their garden keys, Alieu Samba Nyang reiterated that the project aims to enhance rural livelihoods in the coastal zone, and protected them from the impacts of climate change through the demonstration and transfer of successful coastal adaptation technologies and the introduction of economic diversification.

DPS Nyang disclosed that in all the project livelihood support communities, the female population is highest for both the overall and youth populations, as rural-urban migration of the male and youthful population for economic reasons takes its toll.

He, therefore, urged them to utilize the facilities accordingly, bearing in mind that such opportunities are rear to come by.

Dodou Trawalley the project coordinator, said all the credit goes to his PSC, his team, the contractors and the communities for their dedication and commitment, noting that he is just a messenger between the office the project beneficiaries.

The PSC also visited Tendaba village in the LRR and Senegambia beach area, where coastal erosion has swallowed a greater portion of the coastline, and is where the project will embark on soft/hard engineering construction and maintenance. 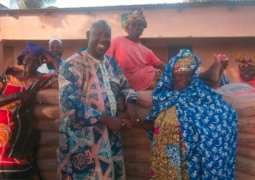