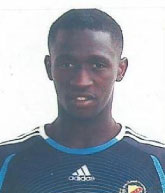 Sulayman Sanyang is no doubt one of the hottest prospects in Bakau Nawettan and banging goals for Bantankoto/Oslo FC, which has earned them a place in the Bakau knockout and league semifinals.

Sulayman started his career with before joining Camba FC and Nigas FC in Bakau Junior tournaments at his tender age scoring several goals.

In 2008, he joined Young Steve Biko and made his debut in the Bakau Senior Nawettan in the 2009 season with Vidar FC as a substitute and after four games he won his place in the starting eleven.

Sulayman, who joined Bantankoto/Oslo FC last season, netted five goals to help his side reach the league final in which he also scored a brace against Ron Mango FC but they eventually lost 3-2. They later went on to win the knockout title.

He made his debut for Bakau giant killers, Steve Biko, back in the 2010 season and made his debut against Armed Forces FC as a substitute and was also featured against Bakau United in the all-Bakau derby game.

He has also featured against the Gambia Ports Authority and has scored several vital goals for the Bakau-based outfit.

Sulayman is currently the leading goal scorer in the 2012 Bakau nawetan with ten goals so far this season to his credit.