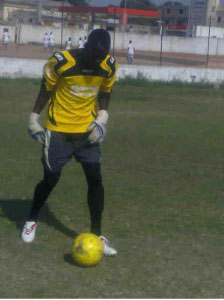 Bubacarr Fatty is, no doubt, one of the most promising goalkeepers The Gambia has produced. The teenage goalie has become a key performer with Serrekunda East FC, in the second division league of the Gambia Football Association (GFA), following his move from Nema United two years ago. He is considered one of the driving forces behind the East Bi outfit, keeping eight clean sheets to help them to finish fourth position in the 2011/12 league season.

The aspiring gloves-man, who was also instrumental in guiding BJ Academy FC to promotion to the Serrekunda East Sports Development Organisation (SESDO) Nawettan competition in 2010, has currently helped the team reach both quarterfinals of the competition (league and knock-out) this season.

Fatty was then scouted by the sports teacher of the school, Bubacarr Jallow, who is still coaching him at Nawetan level with BJ Academy FC, which he joined during his junior school days.

While training with the academy, Mew represented his junior and senior schools in the secondary schools football tournament as a first-choice team goalkeeper, winning his first major trophy in the SOS Global Peace Tournament, and also some trophies for his neighbourhood club in the local Nawetan.

Unlike most young Gambian players, the highly-rated young gloves-man whose goalkeeping advantages surpass his disadvantages, played divisional football before even having exposure in the Nawetan proper, winning his first trophy when he was in grade 10 playing for Nema United in the second division league.

The experienced youngster who was also part of the Serrekunda East Zonal team in 2010 is currently concentrating on the Serrekunda East Sports Development Organisation (SESDO) Nawetan competition, helping BJ Academy FC reach the quarterfinals of both the league and knock-out competition and accomplishing their goal in the Nawetan.