He told the tribunal he handed over the notes, witnessed by members of the interim board chair, and that since the directive was silent, he should go back to his position as human resource manager.

He adduced that he acted as director before becoming the executive director.

In June he applied to go for an annual leave, he said, adding that in principle, the application was approved by the director.

He said he did not take his leave because he was overtaken by events.

He testified that he resumed on 20 August 2011, and received no salary for June and August, adding that some of the staff were not also paid.

He further stated that they were not paid because the organisation said funds were not available.

Njie also said that in August the financial controller showed him a document in which he was instructed by Mr Omar Jobe not to pay his salary, because Jobe was said to be adjusting some payments.

Lawyer Mendy, who was representing the plaintiff, applied to tender the said document.

But Lawyer Ngui Janneh, who was throwing her weight behind the defendant, objected to the tendering of the document.

She told the tribunal the document did not come from a proper foundation and custody.

She argued that the document was not addressed to the plaintiff and copied to him, stating that the financial controller should have been called to tender the document.

Lawyer Mendy rose and said that proper custody does not apply, adding that the document sought to be tendered related to the issues of the suit, as well as the plaintiff through whom it was tendered.

She argued that the document was information provided to him for his salary not to be paid.

“The document is in proper custody,” she told the tribunal.

Magistrate Ngube ruled that the document related to the non-payment of salary to the plaintiff, adding that the said document was relevant.

He overruled the objection by the defendant’s counsel and admitted the document.

John Charles Njie further said that on 22 August 2011, Omar Jobe, the executive director, gave him a letter asking him to stay away from the office and could seek clarification from whatever source.

The said letter was tendered and the defendant’s counsel did not make any objection.

Mr. Njie said he remained home as instructed, stating that he did not receive any instruction from Jobe while at home.

He left some belongings at the office, he testified, adding that Mr. Jobe wrote and asked him to surrender the organisation’s properties.

He never returned to work since he was asked by Omar Jobe to stay at home, he told the tribunal, saying he did not receive any letter from the defendant terminating his service.

He received his last salary in May 2011, he explained

The said letter was tendered and the defendant’s counsel did not object.

He said he was not in the employment of nor appointed by the Gambia government.

He also said he never received any complaint or queries from the defendant in the course of his employment.

He was also never accused of gross misconduct, nor received any warning letter from the defendant.

He was also not aware of any decision by the board to dismiss him.

The case was then adjourned for cross-examination. 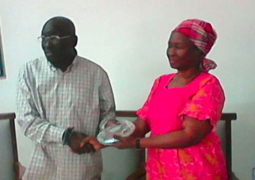