The Gambia National Olympic Committee (GNOC) is committed to ensuring the provision of the highest sports awards to well deserving sports personalities in Gambia Sports.

Accordingly, the GNOC chooses to recognize the various achievements of sportsmen and women through the annual awards process. The GNOC Awards Committee was established by the GNOC Bureau to develop and monitor the key selection criteria for the Sports Awards, to review all nominations and submit recommended award recipients for endorsement by the GNOC Management.

Under the direction and supervision of the Chairman, the Sport Award Committee will be answerable to the GNOC Management with the following tasks:

•The Sports Awards Committee is responsible for ensuring that those nominated for receipt of GNOC Sports awards satisfy the nomination criteria.

•Consult past members who have served and with the prerequisite knowledge to provide relevant information for nomination purposes.

•The Awards Committee has a duty to ensure that recommendations made to GNOC Management relating to Sports awards conform to the criteria set for those awards.

The scope of activities of the Committee includes:

(a)Meet weekly to plan the proceedings of the award process, scrutinize the GNOC database and selection transitory candidates.

(c)Selection of award recipients for endorsement by GNOC Management.

(d)Conduct research on the selected awardees and prepare their citations for presentation during the Awards Ceremony.

In view of assignment of the Committee, the Committee has embarked on a series of weekly radio programmes primarily to explain the criteria used for the awards but most importantly, seek the assistance and cooperation of the general public and the sporting community in particular, in its quest for this year’s nominations.

The Committee envisages that the public will nominate sporting models worthy of emulation and sportsmen and women whose to overall attitude is indication of devotion, dedication, commitment and a sense of duty to sports generally in order to suitably fit the upcoming awards.

The candidates to be considered for the awards will feature in six distinct areas of worthy recognition, namely the Most Outstanding Sports personality Award, Hall of Fame Awards, GNOC President’s Award, Sponsorship for Sports Awards, Posthumous Merit Awards and Merit List Awards.

The general public is hereby informed that the celebrations of the 22nd Edition of May Day Mass Sports will culminate with the annual Sports Banquet and Awards Ceremony a week or two later which date will be conformed in due course.

Accordingly, you are encouraged to submit your written nominations with profiles of your candidates to the Sports Awards Committee members through the GNOC offices at Bertil Harding Highway, Mile 7. 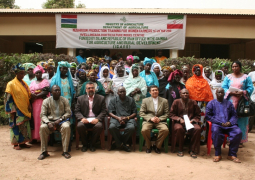