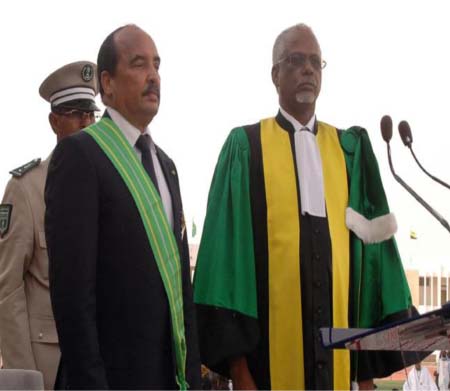 Mauritanian President Mohamed Ould Abdel Aziz was sworn in on Saturday for a second term in the presence of several fellow African leaders, among them the Gambian leader President Yahya Jammeh.

Jammeh told reporters in an airport interview Saturday night, after returning to Banjul from Nouakchott, that his attendance was significant because the two states have a “strategic relationship, and are bound to support each other”.

He said now that President Ould Abdel Aziz has a new mandate, “we going to work on and implement most of the agreements we have signed.”

Abdel Aziz was handed another five years with 82 percent of the vote on June 21 in polls boycotted by much of the opposition.

He was cheered by thousands at the Olympic Stadium in the capital Nouakchott as he vowed to address the problems of the northwest African nation’s poor and “fight corruption and mismanagement”.

He also pledged to tackle racism and extremism, and said he would take on terrorism and organised crime by strengthening the army.

The heads of state of the Gambia, Guinea Bissau, Mali, Senegal and Chad attended the ceremony as well as diplomats and dignitaries from various other countries.

He campaigned strongly on his success in fighting armed groups linked to Al-Qaeda at home and in neighbouring Sahel nations.

Following his victory, the 57-year-old pledged “to be the president of all Mauritanians and to guarantee the rights of all citizens”.

Christmas message 2012 from the Catholic Mission of Banjul by MOST REV. ROBERT PATRICK ELLISON CSSp