Described by many political analysts as a move in the right direction, political parties vying for the 2011 presidential, parliamentary and local government elections  have vowed to elect women to top political positions so as to ensure equal political representation at decision-making levels.

Remarks were made by all representatives of Gambian political parties, including the ruling APRC, UDP, NRP and PDOIS during presentations at a day-long sensitization forum for political parties organized by the Female Lawyers Association of the Gambia (FLAG) and the Inter-party Committee.

The forum, on the theme: “Temporary special measures to ensure women’s political participation”, brought together political party leaders, as well as a cross section of civil society organizations.

Women, he said, are indispensable partners in ’s development process. According to him, the APRC shall pursue its deliberate policy of empowering women by appointing qualified and capable women in positions of authority and decision making.

“The APRC after coming to power appointed the first female Vice President, female ministers; the first accountant general was a female, secretary general and head of civil service and many other permanent secretaries were appointed,” he said, adding that this clearly demonstrated that the APRC has put women in top positions of decision-making.

He stated that the party would continue to encourage women’s political participation to the highest level, and that special opportunities would be accorded to women in decision making positions

Presenting for the United Democratic Party, Dr. Borro Susso, chairman of the Policy Committee of the UDP, noted that since its inception, his party categorically expressed its belief in the equality of sexes in matters of rights and privileges of citizens.

“This was consigned in the constitution of the party as one of the beacons of our policy. The development of the party from formation up to the present time has been made with the full participation of our members. The UDP women’s policy contained in its policy document of which the party manifesto for the forthcoming elections form part of, addressees women’s rights in all sectors with due recognition of their potential role in the socio-economic development of the country,” Dr Susso stated.

Presenting further, Dr Susso explained that the UDP intends to diagnose discrimination against women in various sectors of the economy, and address the problems they are confronted with. He added that the UDP party has adopted a document as its policy with regard to women.

Also presenting was Samba Baldeh, Administrative Secretary of the opposition National Reconciliation Party (NRP), who told the gathering that, as a political party, the NRP has adequately provided special measures to ensure women’s participation in politics and decision-making bodies.

This, he said, is clearly spelt out in the party’s manifesto, which they are working tirelessly towards achieving.

According to Baldeh, it is very clear to all that the role of Gambian women is wide- ranging, and very important to the socio-economic and political development of this country.

However, he noted that the NRP is of the view that there is still considerable room for improvement with regard to women’s empowerment in the country.

“There cannot be any meaningful development without the full participation of women in all aspects of development life,” the NRP administrative secretary opined.

He stated that as part of his party’s future policy, the NRP will seek to make it possible for Gambian women to obtain the highest possible education with training in their profession commensurate with their abilities.

Baldeh further stated that it is his party’s belief that behind every successful man, there is a strong woman. He noted that to comply with the legal obligation, NRP shall endeavor to put up as much candidates as possible in all coming elections.

Renown gender activist, Amie Sillah, who presented for the Peoples Democratic Organisation for and Socialism (PDOIS) said her party is of the view that a strategic vision is needed to guide the formulation of policies and programmes that are designed to enhance greater parity in representative institutions.

According to Amie Sillah, PDIOS’s aims is to establish a democracy which would finally lead the people to exercise full control over the affairs of their society; a democracy based on a non-parasitic and responsive system of representation.

She stated that PDOIS sees the need to transform the party into a school for nurturing the sovereign woman, who is matured and conscious of her rights. 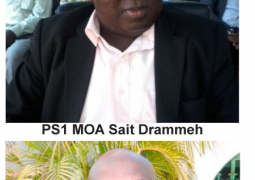