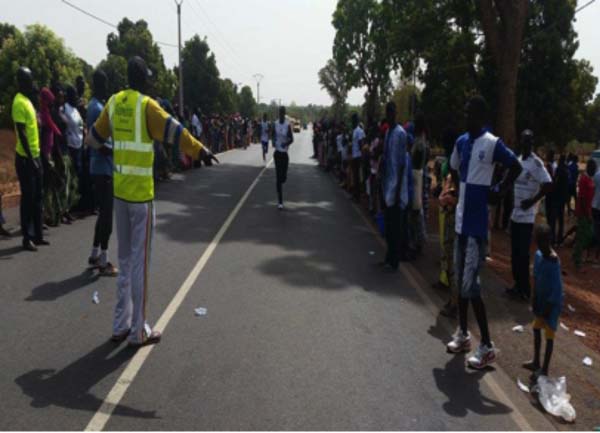 The Gambia Police Force athletes have shone during the recently held 3rd edition of the Bajana International Marathon.

Hundreds of athletes from all over The Gambia took part in the race that took place in the Foni district.

Demba Marong and Sona Saho both smashed course records to win the male and female’s tittles at the 2015 Bajana International marathon.

Demba Marong of Gambia Police Force reclaimed the male’s10km title he could not defend last year due to injury and could not finish the race.

Andrew Jassey, also a police athlete, finished second and got a silver medal with a certificate attached for his effort.

Another police athlete in the name of Amadou Bah finished at 3rd and was decorated with a bronze medal and a certificate.

However, after the road race events, all attention was shifted to Bajana Nursery school football grounds where the donkey race took place. This was followed by the tug of war competition.

Musa Kujabi, a native of Bajana, came out first in the donkey race, whilst Ousman Jarju occupied second and Yusupha Darboe third.

The most interesting event was the tug of war between media personnel and members of the Bajana marathon organizing committee in which members of the press had to eventually surrender.

At the end of the marathon, first, second and third place holders were decorated with gold, silver and bronze medals as well as with certificates.

Human Capital: Education a Catalyst for Development of The Gambia