Defence counsel representing St. Peters Senior Secondary School, on Monday told the Industrial Tribunal in Kanifing that the action by the plaintiff called for summary dismissal without notice.

The plaintiff, Lamin S. Sanneh, sued the school to the tribunal seeking reliefs for the recovery of D157,896 being three years, seven months as damages for unlawful termination of his services by the defendant.

However, Lawyer Mendy, during Monday proceedings, made an application to dismiss the plaintiff’s claim, pursuant to the rules of the Industrial Tribunal.

She said the plaintiff applied for the position of a teacher at St. Peter’s Junior and Senior Secondary School and was offered an appointment for September 2011.

The document dated 15 September 2008, and the offer of appointment were tendered and admitted into evidence.

The defence counsel told the tribunal that the plaintiff was on probation for a period of one year, noting that at the end of his termination in January 2012, the plaintiff came to teach both in the morning and afternoon shift.

Counsel further submitted: “On 30 January 2012, the plaintiff wrote to the Principal of the school, resigning from the double shift with immediate effect from first February 2012, and unilaterally decided to only teach in the morning shift.”

The said letter of resignation was tendered and admitted as exhibit.

The plaintiff, by his very act, the counsel submitted, left his term of employment, abandoned his duty and left the students handicapped.

In consequence, the defendant had no option but to terminate the plaintiff’s contract, which he himself had initiated, revealing that the action by the plaintiff called for summary dismissal without notice.

However, she adduced that the plaintiff was given a one-month notice of his services.

“It is my submission that the action by the plaintiff was a serious breach of contract, especially the plaintiff abandoning the afternoon shift to teach in another school,” she asserted. 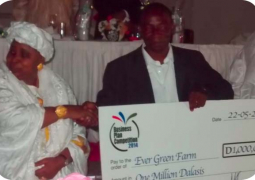