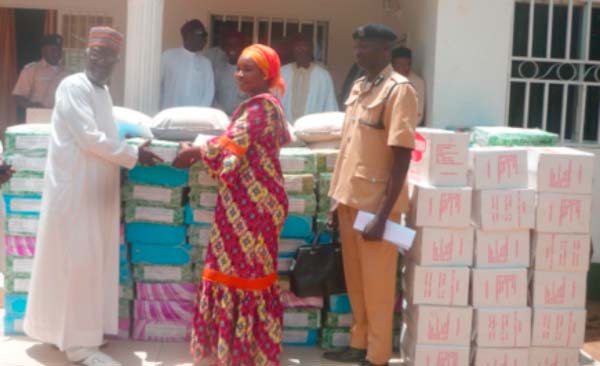 Speaking at the presentation ceremony held at Mile 2 Administrative Headquarters of the prisons, Alhaji Abu Dandeh Njie, chairman of Pipeline Mosque Foundation, said the gesture was meant to discharge one of the most important obligations in Islam.

He said feeding an individual during the holy month of Ramadan earns one a lot of blessing. He thanked the prison authorities and the Ministry of the Interior for giving them the opportunity to do so.

Mr Njie said they were delighted and honoured to be given the opportunity to contribute towards the feeding of inmates.

He recalled that the gesture was initiated four years ago with support from their well-wishers and foundation funds.

He said the gesture has grown so much in the eyes of the Gambian public that well-wishers and contributors are targeting the programme.

He therefore thanked their donors and sponsors for raising the stakes to such an enviable high amount, to ensure they make a meaningful gift to the inmates.

“We are targeting the Muslim inmates and we hope this will go towards nourishing them more in this holy month of Ramadan.”

Mr Njie prayed to Allah the Almighty to give them the will and support to be able to continue the tradition annually.

Modou Jarju, Commissioner of Administration of the Prisons Service, said the gesture has been a tradition, and as such thanked the Welfare Committee Chairman Mam Sait Njie, who has been very instrumental in facilitating the gesture.

He noted that such a gesture is among support they are looking for, adding that it is sometimes difficult how they go about feeding inmates.

He thanked the donors, saying that their intervention would help them meet some of the feeding needs of inmates.

Oumie Kalsum Cham, Principal Assistant Secretary at the Ministry of the Interior, on behalf of her ministry, thanked the foundation, saying they hope the gesture would continue.

“We really appreciate your support and cannot thank you enough,” she added, saying the work of the foundation is well recognized, which is what God wants.

“You are doing it for nothing, but to satisfy the will of Allah,” she said, while assuring them of her ministry’s support in such endeavours.

Ebrima Jammeh, Commissioner of Operations of the Prisons Service, described the day as a joyous one for them.

He further described Mile 2 as a rehabilitation centre, saying the gesture is part of rehabilitating the inmates, who are people who in one way or the other came in conflict with the law.

“If you are outside and remember and care for them, then you are in line with rehabilitating them,” he remarked, saying that when the gesture reaches the inmates they would know they are not forgotten.

He thanked the foundation, saying their doors are always open for such support.