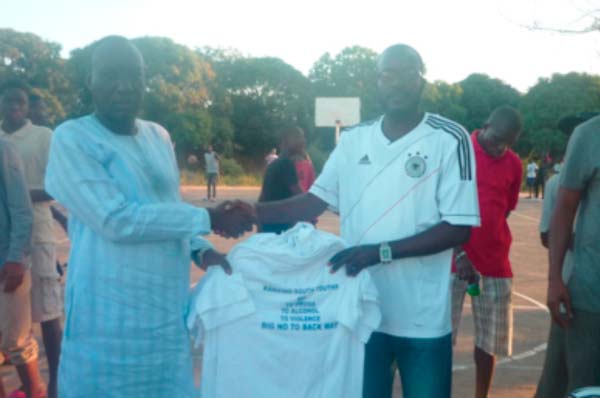 The game played at the French School football grounds at Kanifing was part of Kanifing South Youths’ 10-year celebration of Solidarity with My Community My Responsibility with the theme: No to drugs, alcohol, violence and a big no to back way.

As winner of the mini zonal tournament, Pipeline FC went home with a cash prize of D15,000, a trophy, T-Shirts and jersey.

Runners-up Kanifing South FC received D5,000, a set of jerseys and T-Shirts. Third place were rewarded with D3,000 and T-Shirts while D2,500 and T-Shirts were given to each of the other teams that participated in the tournament.

The winner of Kanifing South tournament collected D10,000, while the runners-up got D2,000. Other teams that participated received D1,000 each.

Speaking to reporters shortly after the final, Ba Tambedou, pioneer of the tournament, explained that Kanifing South youth like football and their team had been doing well in the Serrekunda West nawetan over the year but lacked a playground.

“As such their players go to Latrikunda and other places to train football,” the former Real De Banjul star said, adding that due to that fact he thought of staging a competition yearly during Christmas time “when everyone comes down to The Gambia to occupy themselves” so they would spend more time on the field playing football rather than spending their time “idling or doing unproductive businesses”.

Tambedou, who has also played for nawetan teams such as Sticklers and Kanifing South FC during his playing days, said he started the Kanifing South tournament with 6 teams from Kanifing to encourage homegrown talents in the area but overtime more teams joined the competition at their request, and they ended up having 10 teams.

Every year they stage the competition other teams would request for the tournament to be held in the communities as well, he explained, saying that on the 10th anniversary of the competition they should invite their neighbours to share in their celebrations, which was why they opened the competition this year to a mini-zonal tournament following the conclusion of the Kanifing South tournament.

Mr Tambedou said he is encouraged to continue staging the tournament first because he had seen the tournament over the past ten years produce exceptionally gifted players who have gone on to play not only in the Gambian first division league but also in the national teams (the players include Dawda Ceesay former U-17 player, Momodou Ceesay ‘Zico’ who “helped us win” the African Under 17 Championship on home soil and currently playing professional football, Hagie Tunkara, former GPA player and now coach, and Pa Modou Jagne. These are all products of the tournament.

“We need to open up opportunities for youth,” he remarked, pointing out that Kanifing South had been a dominant force in Serrekunda West nawetan partly because every year they select 2 or 3 players from the tournament.

The tournament has become a production line for Kanifing South FC and other first division teams, he added.

He said the second reason that motivates him to continue organise the tournament is, as a responsible citizen, he owes it to his community and nation to provide recreational activities.

“I love football and think it is one way to contribute to my community but especially to the youth,” he went on, saying that when he decided to celebrate the 10th year anniversary of the tournament he thought they should not only restrict it to Kanifing youth.

“The back way syndrome is tearing families and communities apart and I think we should all speak up as responsible citizens and tell them that there is an alternative,” he noted, saying this was the reason they came up with such a theme for the 10-year anniversary of the tournament.

“We should give the youth of this country hope that they can stay in their own country and make a difference,” he went on, saying the youth think things are got on a silver platter in Europe; “but the reality is different”.

He said he had had support over the years from products of the tournament as well as from Bajara Jabbi, Omar Tambedou, Muhammed Camara, Payeh Samba, Abou Sallah among others and therefore thanked everyone that has been supporting him over the years.

Alagie Ebou Faye, deputising for GFF president, said the tournament was very much impressive and encouraging, adding that they were really impressed as a federation.

Mr Faye, who has been following the tournament since its inception, said as a federation they know the constraints of the organisers included field components such as nets, corner flags and balls. He assured them that GFF would do its utmost best in supporting them in seeing that those areas are addressed.

In conclusion he urged organisers to keep up the initiative, saying the youth, parents, families and the community welcome the idea.

Sang Ndong, an adviser to the committee board, described Kanfing South boys as committed to their community and have been organising the tournament for the past 10 years.

“The tournament is something good for the community as it brings all youth together as well as the senior boys who used to be here before securing professional contracts,” added the Hawks FC head coach.

“Whatever you do for youth it gives you blessing but if you expect anything in return then its investment.”

He said they stage the competition for the sake of helping the youth.

Hawks FC, for example, got 85 percent of its players playing within KMC in the nawetans from here they recruited them, he said while highlighting the importance of staging such grassroots tournaments.

The tournament is another opportunity for coaches and team administrators to scout for raw talents, he added, while calling on other elders of the community to embrace the idea to make it bigger.

He thanked organisers for the wonderful initiative, saying the inclusion of the likes of Momodou ‘Zico’ Ceesay, Pa Modou Jagne in the competition will encourage young players to work harder knowing there is something in football.

Previous:
GRA urged to tighten belts to overcome challenges
Next:
GPA hopes for lead in GFF 1st Division, as Real battles for survival against Banjul United