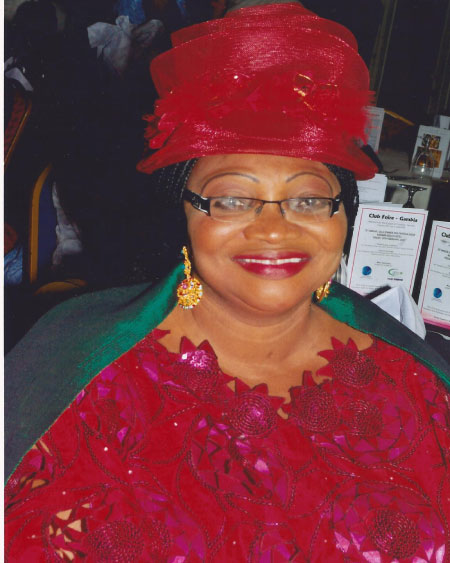 In today’s edition, we bring you the profile of a woman who should need no introduction. She is Aja Binta Jammeh Sidibeh, executive director at the APGWA/SOBEYA skills training center located along Brikama highway. She is an erudite educationalist and one of The Gambia’s most respected citizens.

She was born 50 years ago in to Natoma Marong Jammeh and Alhagie Karamo Jammeh. Her parents came from Illiassa village in the North Bank Region of Lower Badibou District.

Her mark for the common entrance exam was also in the top third nationally. As a result, she won a government scholarship organised by the then Ministry of Education under Louise Antoine Gomez, who expressed her gratitude to Mrs Sidibeh for being one of the top students.

Between 1967 and 1974 Mrs Sidibeh attended where she sat her O level examinations, scoring seven credits including English language, mathematics, science and French. From 1974 to 1975 she got a government scholarship.

Mrs Sidibeh attended Sir Dawda Lower Basic school in (formerly ) between 1962 and 1967, where she sat the common entrance examination at 11 years old for which she got the highest mark amongst her badge mates at school. She was also in the top third nationally.

As a result of her strong academic performance, she was awarded a government scholarship following graduation. The scheme was administered by the then Ministry of Education under Louise Antoine Gomez, who expressed her gratitude to Mrs Sidibeh for being one of the top students.

After securing the scholarship, she went to in the between 1975 and 1978 where she majored in African history with a minor in sociology.

In 1978 Mrs Sidibeh came back to The Gambia and worked on a project called the ‘Socio-economic Study of tourism in The Gambia’.

Between November 1978 and November 1979 she worked at the United States Embassy in as an administrative assistant.

Between 1979 and 1988 she worked for the United States Agency for International Development (USAID) as a training officer. She was eventually promoted to the position of program specialist.

Mrs Sidibeh has served in the following areas: member of the Gambia Technical Training Institute (GTTI) Board of Directors since 2002, nominated  member of the National Women’s Council between 1987 and 1988, member of the Gambia Public Sector-Civil Society Interface Capacity Building Project (GICAP)  project under the Ministry of Trade between 2002 and 2007, member of the Scholarship Advisory Board Committee of the then Ministry of Education between 1982 and 1988, vice-chairperson of the TANGO Board of Directors between 1999 and 2000, adviser to the Federation of Business Women and Entrepreneurs (FEBWE) Gambia Chapter since 2010.