To achieve the goals of patriotism, one has to consider that mere talking against one's rivalry would not solve the problem.

This is so, because nothing good is achievable without one form of struggle to achieve the desired goals. Often failure to do this led one's competitors to always triumph, and to be their source of inspiration.

For example, the great oil wells in the Gulf were all founded by "others" whose ideas and efforts were embraced for the betterment of all by the indigenous.

In a note of welcome to encourage others from other parts of the globe, the challenge of investors and patriotic thinkers is to weigh things on an even scale.

In a small, but popular book, a writer said: "the house belongs to those who live in it."

In all perspectives, we should all understand that the Almighty Allah had created this world out of nothing for the benefit of His beings. But because of the shortcoming of man's own doings, who would have otherwise lived in eternity, the world is now infected with all kinds of self-centredness, segregation, barriers, among other host of egoist tendencies that do not speak well of the purpose of creation.

This is so, because we often abuse what it takes to be the literal meaning of patriotism, thus resulting in all forms of man-made troubles.

This brings to mind the issue of those who squandered public wealth at the expense of others, which by all indication contradicts the principles of patriotism.

Before one weighs oneself as being patriotic one must observe the contribution of others as well.

Do not ignorantly consider yourself patriotic without looking at the good contributions of others, especially your competitors and the Most High. We need to show appreciation rather and condemnation and destruction.

All successful people had shown appreciation to others work.

A case in point is the great Mungo Park, who after years of struggling to find the River Niger said "The Niger, which I was searching so far lying down in the morning sun and flowing eastward, I hurried to the edges and, having drunk some of the water, raised my thanks to the great ruler of all things for having thus far honoured my efforts with success." 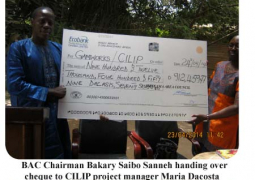