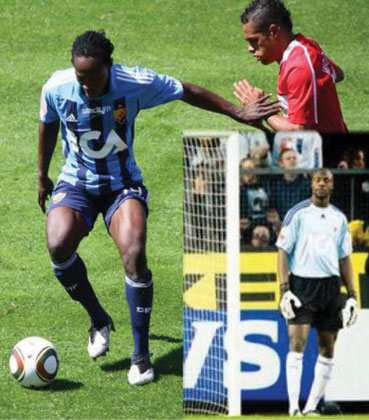 Despite facing some disappointments in the start of the season, Pa Dembo Touray, Kebba Ceesay and teammates have turned their attention to Thursday’s Djurgardens home game against Elfsborg.

Having realised that a greater part of the series is played with Djurgardens still falling under the gap up to the relegation line, the Swedish Allsvenkan giants are now taking every game extremely important.

Gambian Djurgardens duo, defender Ceesay and goalie Touray, both made eight appearances this season and are up for tonight’s game, described as a challenge by manager Magnus Pehrsson on dif.se.

Elfsborg, whose striking force is expected to be led by Gambian attacker Amadou Jawo, is sitting on 3rd place on the table with 16 points in nine matches. This is so far a better performance as opposed to Djurgardens who have only managed 5 points and 15 matches on the table.

When both sides met last year in an intense game, it ended 4-4. Going by the statistics in the 2000s DIF registered eight wins and two draws against Elfsborg.

It became an entirely different story from 2006 on wards, when Elfsborg registered six victories three draws and just one defeat to DIF in 2007.