The Project Regional de Gestion Durable du Betail Ruminant Endemique (PROGEBE) recently handed equipment worth over US$55, 000 to the International Trypanomasis Centre at a ceremony held in Kerr Serigne.

Mr. Bakary B Trawally, the Permanent Secretary at the Ministry of Agriculture said that the evaluation report of the AFDB funded component of PROGEBE has provision for support to ITC research station, and that it has identified mobility as a constraint that requires support.

Trawally revealed that "ITC has been implementing a pure breeding programme on Endemic Ruminant Livestock since early 1990s and has disseminated several improved breeding-male to livestock farmers in the farming communities in the rural areas."

He noted that with support from PROGEBE, it is hoped that it would effectively implement the breeding programme on endemic ruminant livestock.

According to him, the programme is in line with PROGEBE objectives of conserving and promoting the genetic diversity of endemic ruminant livestock in West Africa.

He further disclosed that Endemic Ruminant Livestock (ERL) in The Gambia is kept by local farmers in rural communities, as a source of livelihood due to their adaptation to the environment and the prevailing farming system.

"Small ruminant also form a greater proportion of the ERL in the project areas and are income generation, and improved nutrition is the cornerstone policy of The Gambia government," he asserted.

For his part Dr. Moustapha Diaw, PROGEBE Regional Project Coordinator said that PROGEBE supports the efforts of ITC in elaborating proposals of research development submitted by ITC for funding by PROGEBE national coordinating unit of The Gambia.

According to him, the project has hired an expert to reinforce some of the situation, and as a result a document for the acquisition of technical equipment for ITC laboratories and terms of reference for selecting the technical bureau has been drafted and submitted for approval to the AFDB.

"This support is in a spirit of an effective and open partnership to allow ITC to better play, both its role as executing agency and major technical partner in the implementation of PROGEBE activities in The Gambia," he said.

Dr. Babou Jobe, ITC Acting Director General commended the regional and national coordinators of PROGEBE for their relentless efforts in the proper execution of activities as set out in the project documents.

"As executing agency and major partner in implementing PROGEBE project activities, the materials handed today will go a long way in helping ITC in the implementation of breeding programmes, as well as research and developmental activities of the centre," he added. This, he noted, would bring about efficiency in executing their function which is the ultimate goal of bringing the success of the project. 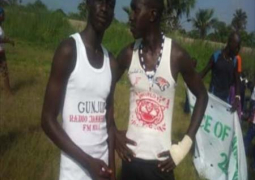