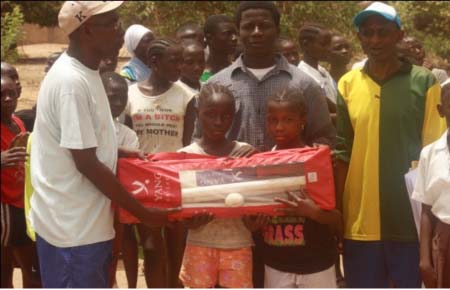 Held to introduce, promote and expand the game of cricket in new boundaries in the country, the weeklong mass participation cricket campaign engaged students from the schools of Gunjur, Sifoe, Bwiam and Mayork.

The campaign, which involved 25 schools around the region and 14 ICC ACA Africa accredited Level 1 and 2 Coaches, kick-started on 26 May in Gunjur and ended on 29 May 2014 in Mayork dealing with basic batting, bowling, fielding and wicket-keeping.

The event was not only important to the Gambia Cricket Association, but also generated huge interest from school kids to play cricket.

The overwhelming turnout exceeded the number of expected participants, which underscored the need for the Gambia Cricket Association to fully engage with schools on a regular basis in collaboration with school authorities and the Ministry of Education.

The schools were given sets of cricket equipment for which the cricket association would like to thank ACA, and the RDM ACA Africa for their support, which made it possible for the association to reach out to the schoolchildren.