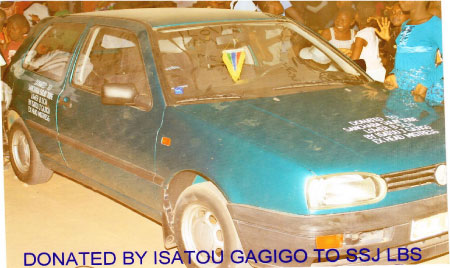 The outgoing headmistress of Sanchaba Sulay Jobe Lower Basic School on 22 December 2011 donated a new golf car to the school.

The donation was made during a farewell ceremony held at the school for Mrs. Isatou Joof-Gagigo, as she was set for retirement at the end of 2011.

Speaking to reporters, Mrs. Joof-Gagigo said the car was donated to her by the PTA (Parent-Teachers Association), the staff and the community in appreciation of her efforts in transforming Sanchaba Sulay Jobe Lower Basic School during the past nine years.

“Sanchaba has ever been my baby since I stepped into that school,” Mrs. Joof-Gagigo noted. “I was very happy during the send-off party because everyone was delighted with my achievements in the school.

“I have done almost 98% of what I wanted to do in Sanchaba LBS. I was able to build a modern library, a modern computer lab with 20 computers and a projector. I provided a school-feeding programme, sponsorship for many students, fence for the school, among other development projects.”

During her tenure at Sanchaba, Mrs. Joof-Gagigo’s personal car used to do all the transportation services of the school, according to members of the school.

This was being done by her because the school lacked a vehicle, and since she was leaving for retirement, the need of the school for a vehicle would still be apparent, which prompted the former headmistress to again donated her bestowal  back to the school.

“I decided to donate the car to the school because during my time my car used to do all the services of the school; even if a child is sick, my car will be used to take him/her to the hospital,” she recounted.

“As I am now leaving, my car will not be available to do all the jobs it used to do in the school. It has always been my intention to get Sanchaba LBS a car and that is why when I received this car, I was very happy and I had to turn around immediately and donate it to the school from the bottom of my heart.

“Though it was a surprise to them but it has always been my intention to help the school with a car.”

She then thanked the staff, the PTA, the students, the donors and sponsors of the school as well as the community for their support during her stint at the school.