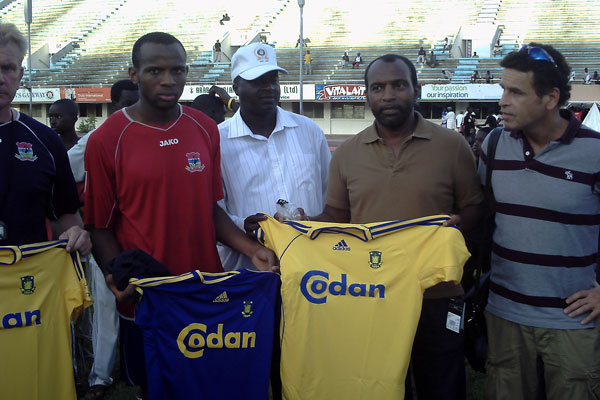 The Gambian striker Ousman Jallow and his new Danish team Brondby FB, on Wednesday 3rdSeptember 2008 donated somefootballjerseys, capsand key holders to young people and fans at the Independence Stadium in Bakau. The donation came when the star striker had just inked a three-year contract with Danish UEFA giant.

Speaking during the presentation, the player adviser of Ousman Jallow, Mr. Ambrose Mendy, who speak on behalf of the Brondby Club, said "the team wants to bring a good relationship with Ousman's home country The Gambia. Within a short period they have gathered a few items for a few lucky people, which is a very good initiative as it shows that where ever you go you must look back to your country." He continued saying, "this a dream of every player who wants to go out and do something for your homeland." The presentation was witnessed by the first vice-president of The Gambia Football Association Major General LangTombong Tamba, Simon, Ousman Jallow's lawyer and some of the members of the press.