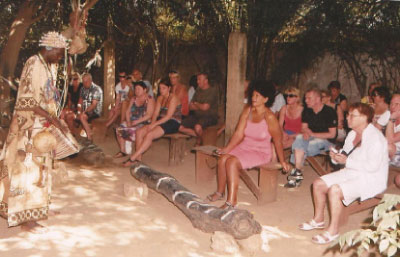 As part of promoting African culture, The Gambia in particular, Lamin Jarju, alias Rongo, a Gambian living in Banjulinding village, is bringing people from Diaspora face to face with African culture through intercultural cooperation and educational programmes.

Over the weekend, a number of tourists witnessed a typical cultural performance by Rongo at his Yarambamba Cultural Centre in Banjulinding village.

Speaking in an interview with Entertainment shortly after the performance, Lamin Jarju, alias Rongo, who originally took this traditional thing from his father and also the proprietor of Yarambamba Cultural Centre thanks to his visitors who came all the way from Holland to visit his centre and to see a typical African culture, adding that this is governed through rules and regulation.

“If I am performing the traditional way no filming is allowed, he said, noting that the beauty of the African culture is very oriented.

Rongo went on to say that culture plays a very important role in all aspects of society.

“The Gambia is a country of sharing and in The Gambia we have culture that attracts the world,” he said.  “We live in an extended family system and purposely dependent on faming to help those who are not employed.”

He said that before the introduction of the milling machine, people were using the typical African materials to pound their rice and coos.

Ria also told Entertainment that The Gambia is a nice country and the people are very friendly.

He said: “I will not compare The Gambian culture with any other culture because it is very rich. When I go back to Holland I will tell my friends about the African culture as well as the friendliness of the people of this country.”