It's really pitiful that most of the people that we see around us throw waste in the streets instead of using a dustbin.

Being clean is a sign of spiritual purity or goodness - as in don't forget to wash your ears - cleanliness is next to godliness, they say. This phrase was first recorded in a sermon by John Wesley in 1778, but the idea is ancient, found in Babylonian and Hebrew religious tracts. It is still invoked, often as an admonition to wash or clean up.

As we witness yet another rainy season, it is important that people take greater care of their environment so as to live a healthy life.

Usually, it is during the rainy season that a high rate of malaria is prevalent, due to mosquito infestation in our envioroment. That is why all should make it a point of duty to ensure that their various communities and localities are constantly cleaned up, so as to prevent mosquitoes from settling in dirty water or grasses around our homes and houses.

In general, people should try to change their attitude regarding waste control and management, and must avoid indiscriminate waste dumping.

In this regard, we want to urge the National Environment Agency to make it a point of duty in sensitising the general public about the Anti-Littering Law. 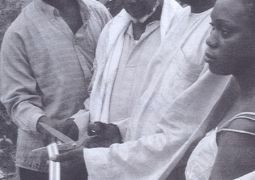