The country’s main opposition parties have failed to reach an alliance in their efforts to challenge the ruling APRC party, leaving them divided ahead of elections in just two months time.
Leaders from the opposition United Democratic Party (UDP), Peoples Democratic Organisation for Independence and Socialism (PDOIS), National Reconciliation Party (NRP), Gambia Party for Democracy and Progress (GPDP), and the Gambia Moral Congress (GMC) held days of talks for the past three weeks on the possibility of fielding a single candidate against President Yahya Jammeh.

“While it is true that representatives of both parties have been engaged in talks aimed at forging an alliance, I can confess that such talks have not led to any alliance,” an opposition source, who expressed disappointment at the failure of opposition leaders to agree on terms, said.

“With the way things stands now, it is better opposition parties go into the presidential election on their own platform, because no further talks can yield any tangible outcome,” our source added.

Options discussed during the meetings included the formation of a UDP-led alliance, the holding of primaries for the supporters of all parties involved to choose a single candidate, and supporting the candidacy of a leader proposed by the NRP, sources added.

A senior opposition member, who prefers to be anonymous, told this paper yesterday that there were significant hurdles to any deal, not least selling it to the respective party followers just two months before the presidential election slated for 24th November.

“It is already too late to convince Gambians that we can do it and, even if we say we can, this could backfire by creating more confusion among Gambians, most of whom were eagerly waiting to see what the final outcome of our discussion would be,” he said.

“There may be time to complete a deal, as others still believe, but not to sell the deal. Having a deal is one thing, but selling it to the electorate is also another thing, and with just two months to go, there is no way we could do that,” he added.

The ruling Alliance for Patriotic Reorientation and Construction (APRC) has won every presidential race since 1996, and analyst say unless the opposition leaders come together under a united front, the country’s opposition will not pose any threat to Jammeh’s 17-year-rule.

While some political analysts are of the view that the November polls will bring together a fragmented opposition, others said even with less than two months to go, it is not too late for the opposition parties to bury their differences, and come together in an alliance, if the right actions and decisions are taken.

A total number of 837, 029 (Eight Hundred and Thirty Seven Thousand, Twenty Nine) people have registered to vote in the November polls, showing a massive increase over the 670,336 registered voters for the last elections.

Meanwhile, incumbent President Yahya Jammeh, who will be seeking a fourth term in office, has vowed not to campaign in the coming election, and promised that the elections would be free and fair.

The public relations officer of the National Drug Enforcement Agency (NDEA) and the officer commanding prosecution, Assistant Superintendent Abdoulie Ceesay, has said that there is a considerable reduction in the number of drugs-related offences in the country.

This, he added, was as a result of the agency’s intensified crackdown against drug users and peddlers.

NDEA’s PRO further stated that as far as drugs-related acts are concerned, regardless of the quantity, anybody who is caught with cannabis sativa would face the full force of the law.

He pointed out that the law has made it clear to everybody that drugs are prohibited substances, noting that the law says anybody who is caught with cannabis of more than 2 kilos would be charged with possession of cannabis for the purpose of trafficking.

“The drugs Act made it clear that it is prohibited in law, so everybody should avoid it,” the PRO declared.

“Before you can find a group of boys sitting in the street smoking cannabis the whole day, and nobody is there to tell them that it is prohibited in the eyes of the law; but now things are different, as most people are now aware of the NDEA crusade against drug traffickers,” he said, adding that the agency would leave no stone unturned in the fight against drugs.

ASP Ceesay further noted that the agency is always advocating that landlords must not allow any group or individual to use their compounds as a drugs-pushing centre or selling point, as this could lead to their compounds being forfeited to the state.

“I think the landlords and the general public are responding very well in that area, though there are some bad elements that are still not adhering to our calls. They are still dealing with the illegal substances,” he stated, adding that the long arm of the law would one day catch up with them, and they would face the penalty.

He said the NDEA alone cannot do it and, therefore, needs the intervention of the general public in the fight against the drugs menace and its related offences. 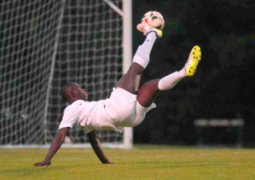