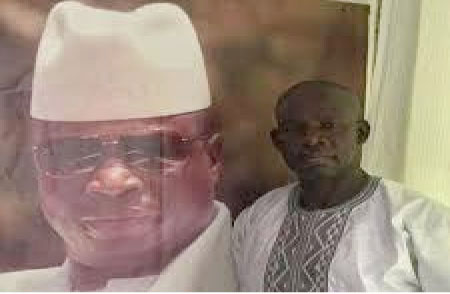 If there is anyone with an experience of Jammeh’s brutality on an entire family, it is no other than Ousman Rambo Jatta, a former local government ward councilor. In his early years of politics [being also the youth leader of the main opposition UDP party], Jatta with members of his family had been arrested multiple times.

He had been arrested and imprisoned incommunicado, isolated and his whereabouts became unknown - moved between detention facilities and mentally tortured.

This kept ongoing for years until Jatta became persuaded that the only way to maintain his liberty is to support his abuser - former President Yahya Jammeh. In his very own words:”If you cannot beat the system, you join the system.”

Fast forward to today, Jatta has seen nothing wrong with what Mr. Jammeh did to him and described as lies against the former autocratic ruler allegations by many Gambians of gross human rights violations, including torture and rape.

Rambo Jatta’s behavior is nothing short of an example of Stockholm Syndrome: a situation where victims develop sympathetic sentiments for their abusers, defend and protect them, even from authorities.

Ousman Rambo Jatta has been going out of spiral launching attacks on officials of the Truth Commission and its witnesses, who are mostly victims of the Jammeh regime. He particularly targeted Essa Faal [Lead Counsel of the Commission] and Fatou Toufah Jallow [an alleged rape victim of Jammeh] during a political rally organized by the APRC party at Abuko.

To defend and protect Jammeh, Jatta resorted to attempting to brainwash the public by accusing Counsel Faal of paying victims, especially female witnesses to lie against former President Jammeh. He has also threatened Ms. Jallow and accused her of taking money from Western governments to tarnish Jammeh’s image and to maintain asylum status.

It has been the same tactic used by Jammeh’s APRC government: accusing citizens out of the country of being paid by rights groups to assert allegations of rights abuses against his administration and to secure asylum.

Needless to say, it is a low blow for Jatta to continue spewing such propaganda to state that Counsel Faal has political ambitions that will be crushed by Jammeh’s APRC party.

Rambo Jatta’s attacks against Mr. Faal and victims of the APRC regime should be condemned. Even where we disagree politically, we can agree that the Truth Commission and victims deserve our support.

Faal is tasked to do a job and he is doing exactly what is expected of him - inline with a mandate that has been sanctioned by the people of The Gambia through legislation by the National Assembly. Rambo Jatta cannot slide through the mud this process of healing the nation because of his disliking for Lead Counsel Faal.

Lead Counsel Essa Faal has decades of experience in the legal field, including international human rights law, having dealt with military and war crime tribunals with distinction. He should be encouraged to help this country in its healing and reconciliation process. There was no politics in his selection. It is his qualifications, experience, and skills, coupled with the achievements that allowed him to work at the TRRC. Even where we disagree with him, we know he is guided by ethics and professionalism.

It also takes a lot of courage and strength for victims, especially females in our society to come up and narrate their story. Telling your story sometimes can bring some form of closure but it is far from total freedom. The damage inflicted on victims is beyond painful. We should empathize with them and Rambo Jatta should not make a mockery of their ordeal.

But this is what dictatorship does to a society. It divides us and destroys our humanity. Our society has been in denial for far too long over the abuses in the country. Many saw the allegations of torture as political propaganda until Jammeh lost elections. Even the few that believed the reports of rights violations thought Jammeh had foreign mercenaries torturing Gambians. The nation is in shock that it was their fellow Gambians that were torturing and summarily executing their brothers and sisters.

Even a victim of Jammeh’s brutality like Rambo Jatta says his many arrests and incommunicado detentions [one of which lasted a year] were not violations of his rights. He insisted that Jammeh, despite being the president at the time, had no hand in his arrests and detentions without trial. He has suggested that he would not testify against Mr. Jammeh.

Jatta had suffered in the hands of Jammeh. Right groups, most notably Amnesty International launched campaigns to secure his unconditional release. However, he abandoned the UDP for Jammeh’s APRC and became a part of the brutal system of oppression. He quickly rose in the ranks of Jammeh and served as Managing Director of the pro-government Observer Newspaper and later became his Permanent Secretary, enjoying financial stability under the dictator.

He thrived by giving a blind eye to Jammeh’s brutality and even defending the ex-ruler for abusing him. Jatta became chronic to abuses of the regime that violated him and many Gambians.

Despite new shreds of evidence of rights violations, including rape and murder against Mr. Jammeh from his team of assassins [the Jungulars] and close aides, Rambo Jatta took up a senior executive position role becoming the APRC Deputy Leader and a losing candidate for Mayor of Kanifing Municipality. Indeed there is a problem - for a man that was truly a Jammeh victim, with no iota of doubt, he is holding on strong to his abuser and planning with him every scheme to head back into the country and hopefully regains power - a plan that is truly unrealistic and farfetched.

The author Assan Sallah is a Gambian journalist living in Germany. He was news editor and security affairs reporter at the Daily Observer. He is the editor-in-chief of Mamos TV website.