Having carefully gone through the CRC process thus far, allow me to share my thoughts and advice.

What the CRC is presenting the country at this moment in time should not be used as an occasion for interreligious or for any tribal, cultural divisions of any kind. To do so would in fact even be an abuse of the opportunity that now presents itself. If anything, the occasion ought to be used to affirm to ourselves what The Gambia has always represented and what Gambians are all about.

1)         This ‘peace’ we have always maintained and enjoyed, this peace that all visitors to Gambia have all, without exception,  recognized and admired, was planted or established not on Christian-Muslim differences or disagreement, or acrimony, but on true harmony and sense of oneness through family, kinship, and sense of one people. Religion was never in the past employed or allowed to create or foster disharmony amongst us. Of course the big truth of the matter is that the peoples of The Gambia lived as one big family long before Christianity or Islam came to our land. For example there were families of Ceesays, Joof, Njies, Jattas, living together harmoniously even up to and through the religious divide brought by Christian and Islamic missionaries. We know that even in this period that we live in, most families of The Gambia comprise Muslims and Christians, a mixture produced no doubt by free choice of religion. If this situation of free choice, peace and harmony has been agreeable for us in the past for as long as we can remember, why should we now or at any future point in time, allow for a breakdown that would be detrimental to good interfaith relations?

I believe the peace and harmony which has always been a key feature of The Gambian character ought to be maintained at all cost.

I believe all the emphasis on ‘Shari’ah’ is divisive. Look at all the other countries thatpractise Islam, and even those that have a Muslim majority, and the question is ‘have they had to enshrine Islamic precepts and practices, including Shari’ah, in their State Constitutions to make Shari’ah applicable in those States’? Does the absence of ‘Shari’ah’ in their State Constitutions cause them any adverse situations? or any setbacks? These countries whether distant or in our own Sub-region are all developing relatively well. Meanwhile Gambia is virtually the least of the least Developed Countries (LDC’S) and the question is ‘would divisions and divisionism help us develop or indeed impede that process?

3)         Why do we need a Shari’ah High Court when there is already the High Court of The Gambia with original jurisdiction to deal with all civil and criminal proceedings?

Would the introduction of this proposed new Court not be a way of giving prominence and privilege to one particular religion, contrary to the letter and spirit of Section 67 (6) of the Draft Constitution?

And if Shari’ah is to be legislated at all, would the Cadi Courts not be more appropriate starting point to deal with Shari’ah matters with right of appeal to Superior Courts and the Supreme Court being the apex?

4)         The use of the term ‘Shari’ah’ lends itself to a number of interpretations: Shiite, Sunni, Ahmadiya, Maliki, Hanafi, Shafi or other schools of Islamic thought. Which interpretation is the applicable one? All Gambians have a right to know and to understand what is contained in their Constitution.

5)         When we observe inSection 9 (e) of the Draft Constitution(S7 (f) of the 1997 Constitution) that Shari’ah is to be applied to “members of thecommunities to which it applies”, it is to be noted that such provision should not be imposed on those members who do not accept Shari’ah to be binding on them, including some Muslim non-conformists and even non-Muslims living in those communities (communities meaning communal entities). This position of the Constitutional provision needs to be clearly spelt out to avoid all doubts. Also is it permissible to incorporateBaha’i precepts, Christian Canon Law, Torah, in the Constitution’s personal law section?

6)         Including the term ‘Shari’ah’in a national document is unnecessary to the extent that such inclusion does not solve a problem that anyone can see, whether actual or imaginary. In all the circumstances as earlier enumerated, the prudent course would be to leave out the application of this term since all it does is help create doubt and inconsistency having regard to the non-discrimination provisions contained in our document; and the secular, all inclusive, tolerant nature of our society as it currently is, and how it has always been from time immemorial.

The concern is not without basis; it does not appear necessary; other bigger Islamic countries are not including it at all in National Constitutions; lastly the recent threats in the country against Christians, owingprobably to Islamic influences created by certain inclusions in the National Constitution, givegreat cause for concern; the general silence of Muslim elders during the  crisis over the Banjul Christian Cemetery and the unilateral, unwarranted and unconstitutional declaration of The Gambia as an Islamic State, give even greater cause for concern. As a matter of fact some Banjul Muslim Elders went to the extent of publicly congratulating the former President for those actions.It is not clear whether or not Banjul Muslim Elders even consulted with Muslims in other parts of the country.

Everything considered, some have good reason to be concerned, if not apprehensive given the sudden and unexplained elimination of the word ‘Secular’ from our Draft National Document while continuing to promote and now progressively to intersperse the word ‘Shari’ah’ within it. To be very honest to CRC and to fellow Gambians, given all these recent declarations and textual overtures, I myself like many other non-Muslims am not comfortable with all these incidences. The Wolof people have a saying: ‘ku ndobin rey sa maam, boh giseh lu nyool daaw’.

8)         A cross-section of younger Muslims that I have spoken to havealso indicated no big interest in this question whether or not Shari’ah should be included in the Constitution. Some have even argued on what the correct interpretation should be while others declared their detachment from it all. It seems therefore that this adherence to Shari’ah is being held and pursued mainly by some elders particularly some who have been regarded as holdingIslamic extremist and fundamentalist views, whether they be inside The Gambia or outside The Gambia.

The CRC is therefore implored to raise this specific question of inclusion of Shari’ah directly to their audiences across the country. My guess is that many will be found disinterested or indifferent on the topic whilst some may even disagree openly about the correct version of Shari’ah, sought to be applied. The test would be that if apathy or disagreements emerge, then that is one good reason not to include ‘Shari’ah’ in the Constitution; this reason in addition to the fact that a great number of non-Muslims are more comfortable to see it excluded. 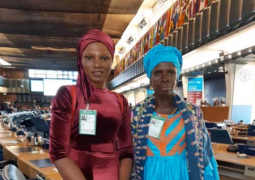